Why we live in the middle of nowhere 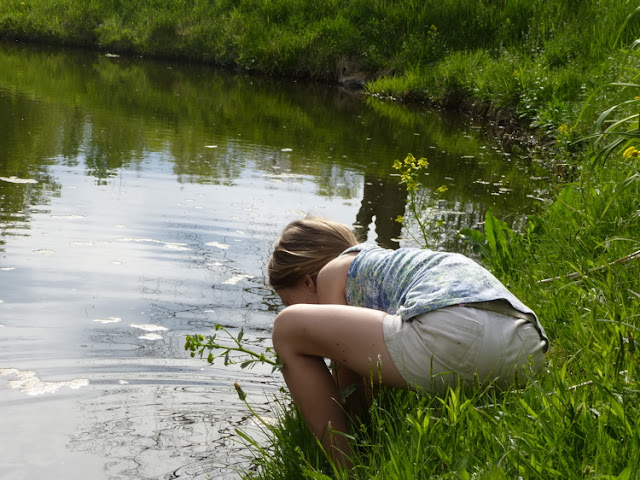 Isla was begging me, as she so often does, more often than I care to admit, to let her "watch something" the other day. Like Pavlov's dog, the minute she steps over the threshold of this house, she begins to feel the pull of the screen, in our case, the computer monitor that connects her to the world of Netflix, or PBS Kids,or Scooby Doo reruns on YouTube.

I watched TV as a child. I have vivid,visceral, memories of staring, thumb in mouth, shoulder's slumped, glass of milk and pile of Oreo cookies by my side, at the TV screen as Bobby Brady attempted to run away but only made it so far as the back yard.

I'm nostalgic for the days of television now, what with the built in governor it had, given the simple fact that TV programming ran on a schedule.

You watched a show. The show was over. You turned it off. The TV stayed in one room. You went to another. Or outside, beyond the reach, and the pull, of the screen.

There is no "over" on the internet. There is no fixed place where we engage with hand-held gadgets. Today our screens follow us wherever we go, if we want them to. Unless, of course, you live in a place that still has no cell-service.

Anyway, even though I dreamed of getting something done, I bravely told Isla "no," when she asked the inevitable question. When the next question came--"then what can I do?" I was prepared.

"Read, draw, climb a tree, look at birds, go outside, watch the ants, ride your bike, go to your room and be bored, be a kid, look around you, life is full of things to do, or not do," I said.

"Let's go to Maria's pond and catch some frogs." 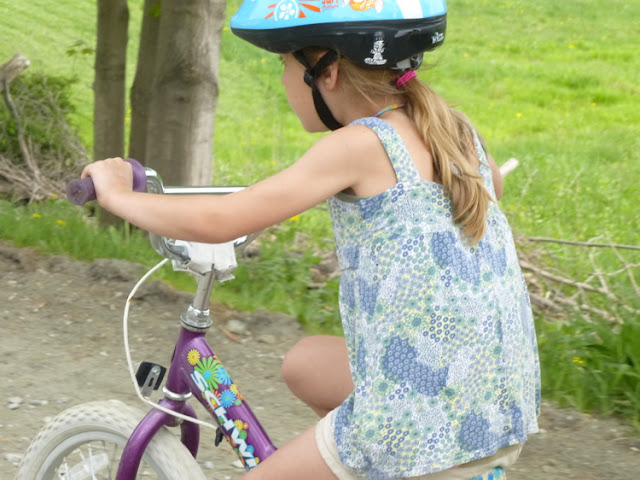 And so we went. 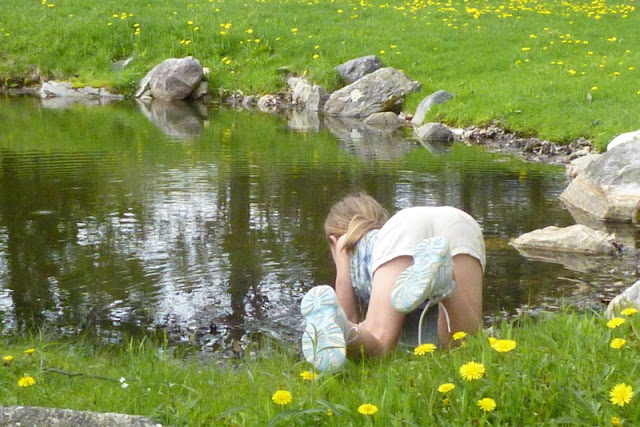 And Isla leaned in. Unafraid of the muck and mire. And the frogs seemed to be waiting, for a fearless little girl, just like her. 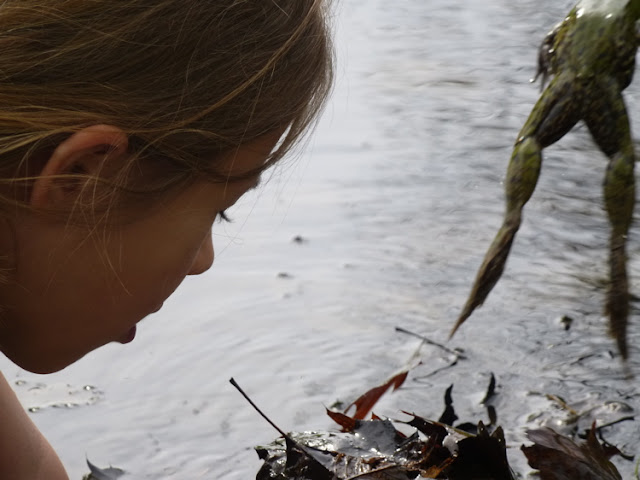 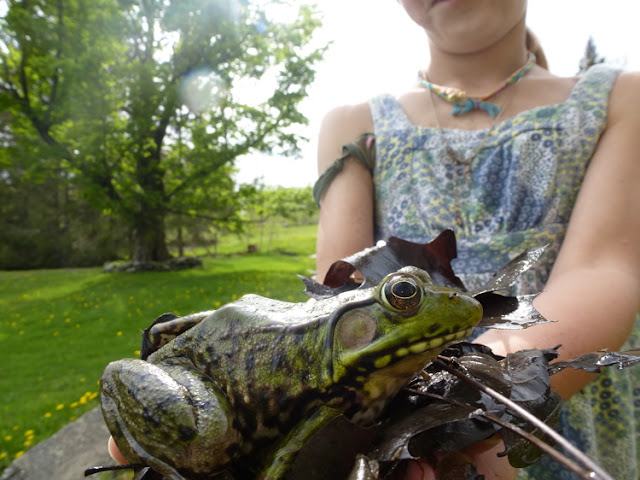 But Isla persevered. Did I spell that right? It looks funny.
And Isla was rewarded for her perseverance. 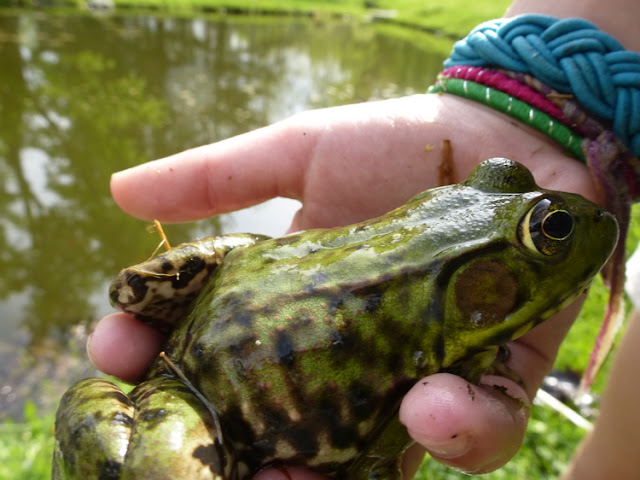 And she never tired of the sensation of slippery frog in the palm of her hand. The Vermont version of a hand-held gadget.

Over and over again. She let the frog go, she caught the frog. She let it go. She caught it again. I wondered if this frog might possibly be Esther's old friend, Bernadette.
She seemed familiar. And almost as if she was enjoying the game of catch and release.

She'd jump away from the shore, then swim back directly towards Isla. Several times she jumped right out of the water near Isla's feet on the grass.

I had the rare of experience of watching all of this, without once feeling as if I should be somewhere else. Without once saying, "C'mon, Isla. We'd better get back."

I squatted on my haunches, or sat on a rock, at the edge of the pond, and waited.

Until she was done. And we went back home again.

Leaving the frogs, of course, behind. With the unspoken promise that we'd be back.

Oh, we'd be back. You can count on that. 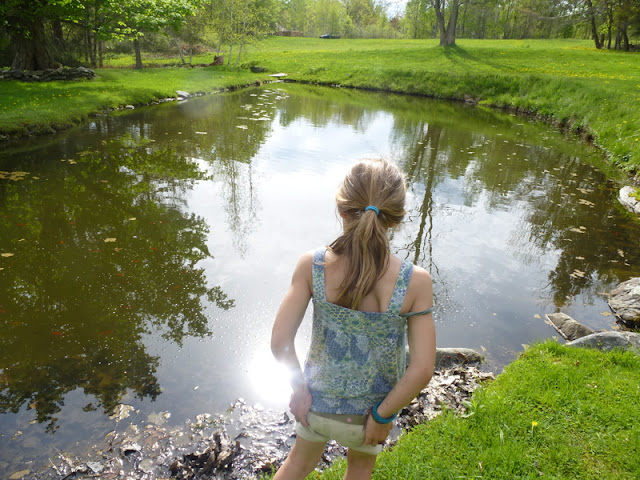 On a runaway train to join the global motherhood movement 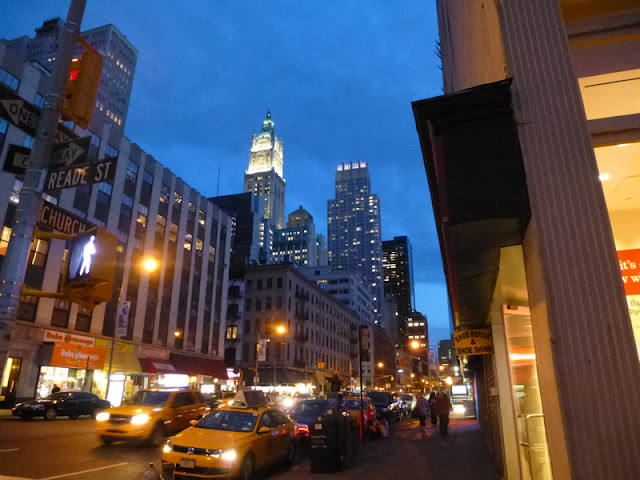 I'm on my way, via Amtrak,  to New York City. The trees are whizzing past and every once in a while I can look out and see the wide, slow moving Hudson River on my right. Each time the train whistle blows I find myself swooning with some strange primal sense of nostalgia mixed with the pure excitement, anticipation, of moving through time and space from one place to another.

But I like even more that I'm going to the Mom+Social global motherhood summit to take part in a collective pow wow about how to make the state of the world's mothers as safe and healthy and filled with hope for the future of their children as can possibly be.

The thought of people taking the time to put their heads together to figure out how to better spread the word of the importance of mothers around the world inspires and encourages me beyond words.

One day and a lot of walking later:

Now that I'm here, I don't know where to begin to describe what I've seen and heard.

I've seen Christy Turlington, 80s supermodel turned women and children's health advocate. Her youthful beauty was distracting only in that it made me insanely curious how old she was. She's 44, apparently. I was hoping I'd find out she's at least ten years younger than I am though I knew that was impossible.

I saw Robbie Parker, the father of Emilie Parker, one of the six-year olds shot dead in the Newtown school shooting, cry several times onstage as he explained just how much his daughter changed his life and made him a better person.

I heard Carolyn Miles, CEO of Save the Children, speak of the fierce determination of all mothers to ensure our children the best future possible future. I also learned how she came to devote her life to non-profit work. She described the day she locked eyes with a mother in the Phillipines and became profoundly aware that that woman's baby, just like Carolyn's baby at the time, had no less right than did her child to the very best future he could possibly have.

I listened to Fortunata Kasege talk about the sorrow of learning she had HIV and the joy of learning, a few months later, her newborn baby tested negative for the virus.

I heard Jennifer Lopez and her sister, Lynda Lopez, banter on stage about being pregnant together and the importance of sisterhood, be it blood sisters or simply a tribe of supportive women around you. I experienced another superficial moment, ala Christy Turlington, when I could not take my eyes off sister Lynda's legs, which I described as leaving the stage five minutes after the rest of her body did. They were that long.

I was moved by a woman, a Latina blogger, named Jeannette Kaplun, when she said
"The fear of losing your kids can paralyze you no matter where you live, no matter what kinds of luxuries you can afford."

I learned about a United Nations campaign called Girl Up that inspires American girls to become global leaders and channel their passions to global issues.

We were presented at the beginning of the forum, with the question "What one thing, as part of the global community,  can we do to support the world's mothers?"

Can you answer that question?