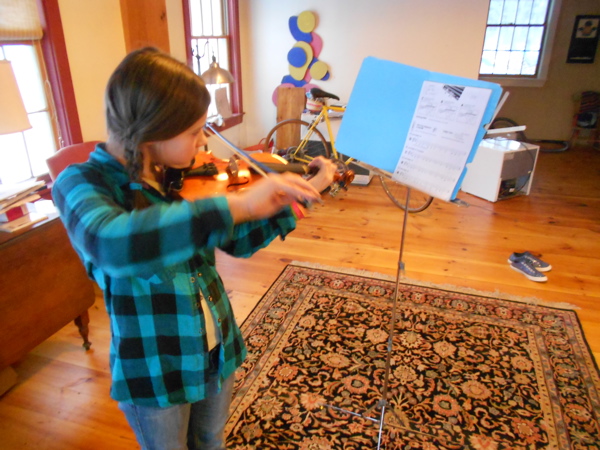 I took Esther to see The Artist last night. We both loved it. She especially. She really glows when she knows she is being invited along to do something adult, with "Mummy." (I've noticed she calls me Mummy and Isla calls me Mama.)

And Essie rises to the occasion of grown-up dates--  her keen little mind opening up to swallow every bit of nuance and information it can get and I can hardly keep up.

On the way home in the car her questions just kept firing out of her mouth, rapid fire, and I was dodging bullets the whole ride home.

The conversation went from suicide, there is a scene towards the end of the film that gets suspenseful and, though nothing is shown, presented the visual of a concept Esther has never before been presented with, or considered. (Trying not be a spoiler here.)

Next we were talking about what would make someone so upset they would want to die at their own hand, and that led to the topic of depression, and then antidepressants, which, possibly, had my grandfather had access to, our family history would contain one less tragedy. I resisted the urge to tell her that sometimes, like right now for instance, I use antidepressants....

Then our talk switched to technology and how I feel it breeds loneliness and discontent, and then we were onto the economy and recession and how stressful money and unemployment can be for people, then she wanted to know what caused the recession, and then the topic came to divorce.... and at that point I was ready to raise the white flag and beg her to just put on her ipod nano, or put on some cheesy radio station, or talk about Justin Bieber.... something, anything, other than these deep topics.

And I am simultaneously wowed by her curiosity and her capacity, her willingness to try to understand so many adult concepts, and cowed by the breadth of her hunger for knowledge and the whole idea of me as a filter for the information she takes in from this world.

She is ten, after all. Ten. And her desire to know, to understand: Why are so and so getting divorced? Why does so and so want to stay with her abusive husband? Will daddy be able to get a job when he gets home? Not to mention her surprising understanding of the riddle that is navigating the socioeconomics of friendships:

"L doesn’t understand why everyone can’t go to the summer camp for a month, or why I don’t just order a pair of $Custom Converse.."

I’m proud of her little big mind. I admire it. But I struggle with knowing how much to feed it and how much to withhold because her appetite for information is insatiable and I don't like how easy it is to satisfy it, as if everything I say is exactly how it is. I hear her repeating things I've said, and hear my judgment and bias in her words, hints of sanctimommy in them, and I cringe.

The kid is paying attention.

I have no recollection of caring what my mom was talking about on the phone, or in the new living room over drinks with Mrs. Robertson, or Mrs. Cone, when I was a kid.

But Esther, she cares. And she is hanging, tightly, on every single word. 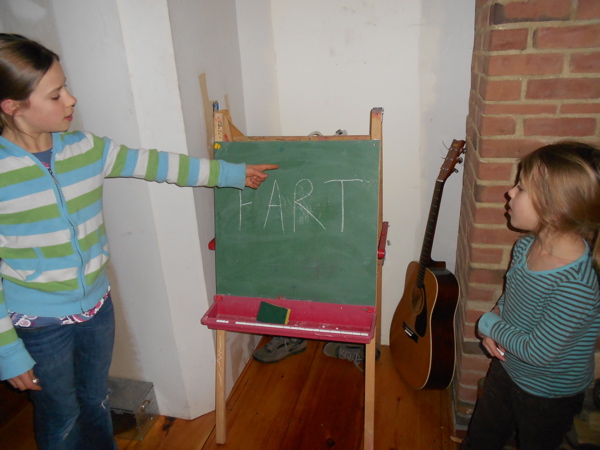 She reminds me of one of my twins, who is 8. The other twin could care less about such things but Z is so curious. She wants to grow up so fast, she is mature beyond her 8 years which scares me.

I admire the things you do with your kids, so creative and you let them express themselves in wonderful ways.
And you word things so well, I'm sure that is why she wants to know more.
I find it hard to discuss heavy topics, I want to sugar-coat everything to protect them. Still learning.
xo
Great post, as always!!
ps. does that photo say 'FART'?
Awesome. ; )

Okay - the last photo is awesome!
Also, I hope that's what it feels like for me as my two girls get older. Right now it's "mommy - pretend to be a prince and i'll be the princess." I understand the anxiety of being her primary filter to the world, but I still yearn for more adult conversations. To see who they are becoming.

I've got me one of those too, and I well know the feelings you describe.

This is the bit I am looking forward to - just perhaps not so young and not in one conversation! I remember being 10 and older when I still had to go with my parents to outings and just loving the adult conversations. My parents had quite a few friends with kids the age of my siblings (younger) so often I would quite happily stay with the adults and soak up their conversations. At the time I agreed with my parents on their views. As I got older I started to question them and now I actually think completely different to them on many many topics.
Have fun navigating through it all. I just hope I can.
Dana

Wow what a precious mind to have in your careful hands. Love it and of course nothing says single-minded curiousity quite like 'FART'.

Esther doesn't have four siblings... The fewer the children, the more the parents count as a powerful influence.... There's a French story by Boris Vian in which kids are put into cages. but they don't care; because they know how to fly. Nancy :)