The antidote to Britney Spears 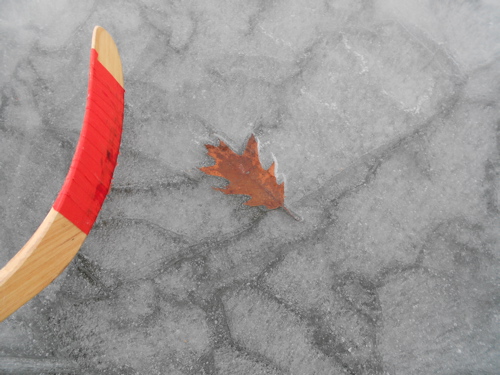 You appeared out of nowhere, resplendent in a baggy T-shirt, shorts, and running shoes, wired for sound with earbuds in your ears.

My daughters and I spotted you at the same time as you sprinted the row of stadium steps--casually down, swiftly back up again in a surge of power-- propelled by ambition, visibly strong legs, and, I’m guessing, your playlist.

You were oblivious to what was going on around you-- the women’s hockey game, the regrettably small number of spectators, me and my family.

My girls were mesmerized by your motion--the very vision of you moving, muscles flexed, through the crowd. As you ran past our seats and continued on your lap around the stadium, my youngest, Isla, left her seat and jogged to the stairs in a perfect emulation of you.

She wasn't chasing you. She was being you.

She ran up the first flight, then hopped down again, then up the second, tripping only once on her dress, then back down again. Then, as she headed into the third flight, she looked up to see you coming back down on your second lap.

Startled, she  jumped aside and you smiled at her as you passed-- the smile of a young girl who remembered being an even younger girl. She chased you up your last sprint, her short skinny legs, clad in stripey tights, no match for yours, yet undaunted by the competition.

As you disappeared around the corner again for another stadium lap, she followed you this time. All the way around.

I watched her from my seat. She looked so small at the other end. She fell again, and bounced back up. She moved so swiftly. So determinedly. This, my child who normally whines if she has to walk more than a block.  And you, so far ahead of her, with no idea, still,  you were being followed. No idea the part you were playing in my child’s fantasy. No idea what an inspiration you were.

She followed you up and down the three flights of stadium steps and around the stadium again. This time, on the far side, I noticed she had been joined by two more little girls, one ahead, one behind. Each running. Each inspired by the sight of you. You did another stair circuit and were gone.

Isla came limping in from her last lap, jogged straight to my seat, and put my hand to her heart, underneath her dress.

“Feel my heart,” she said, her eyes wide and her cheeks splotched red with life.

It was thumping. Wild and steady against my hand.
Posted by Betsy at 3:07 PM

This is so amazing! I hope my girls choose role models like THAT girl!

There really are no words for how much I love your posts. Thank you once again for giving me a reminder to stop and notice the "little" things and to let my children be children.

Sheri: I hope so too. I had, in all honesty, driven all that way just so my girls could see women playing really good hockey. Little did I know, the opportunities for positive role models would be so expansive.

alouise: Thank you for reading. (:

So beautifully written Betsy. Alouise said it, but it's why I'm always checking in to see what you've written each week. Thank you.

By the way, as I read the post I thought how lucky your girls are that they will have accounts of these fleeting moments that would probably be otherwise forgotten. Your words are better than a thousand photos (though they're lucky to have those too!)

I LOVE when we see older girls out and about in their soccer or other sports gear. I think my own daughter notices right away, and I think it makes her feel a part of a big team, not just the one she plays on, but a whole crew.

Robin: I know just what you mean. I love that too. We never, ever ever saw this in France. It is so nice, in that regard, to be back in the world of sporty women.

How many little girls do you think you inspired when you were on the Olympic team? ;)

That was beautiful. Thank you.