Saying goodbye to Ian, again, in England has left me feeling flat. As flat as a human can be and still be breathing.

I am a piece of cardboard. A cereal box, empty and folded. Ready for recycling. A newspaper, read, handled, folded in half and shoved under the bed.

I feel it most upon waking. Deflated. All my air, inspiration, hope has leaked out of some invisible hole overnight.

My sleep is fitful, hot, unsatisfying. I am seething with something. I miss Ian. I don’t want to be here without him any longer. I’m angry. Yet, I feel nothing.

It’s hard to parent when you are flat. Hard to find my arms to hold my children with. Hard to feel my heart beating. Hard for them to cuddle me without bumping into sharp edges. They crawl into my bed and lie quietly next to me. My heart says, reach out, enfold them in your arms. my brain, my stupid brain, won’t let me. It’s almost as if I’m too weary. Or as if I don’t want to let them in. Don’t want them to catch it, whatever it is I have. This melancholy. 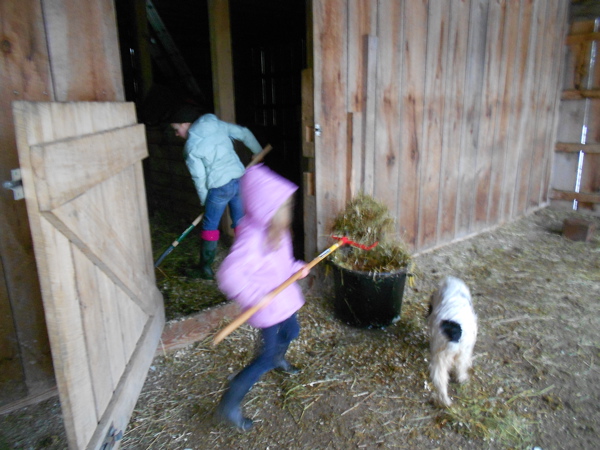 I spent three blissful weeks with Ian, not once bothering to discuss the status of his immigrant visa beyond the most passing of comments. We were together, it was nice, let's not ruin our reunion with annoying, maddening bureaucratic talk.  Anyway there was nothing to talk about, we were in a holding pattern. Just waiting. Or so I thought.

Just days after I got back from England, I got an e-mail from Ian regarding a letter from the National Visa Center that had been waiting in the mailbox in France, for  three weeks. It was the hardcopy of a letter I received, and we had discussed, back at the end of November just before I went to Guatemala.

There was an attachment, as always, and forms to fill out. They were waiting for him to officially name me as his "agent." We had discussed this. Somehow, this discussion had failed. Ian thought I was meant to fill the form out. I knew he was supposed to fill the form out. I believed, the whole time we were in England together, that he had filled the form out and e-mailed it back to them.

I was wrong. Nothing had been done. The NVC was waiting for this form. No further progress was being made without this signed form. We had messed up, once again.

Our argument started via e-mail. Then we took it to Skype. I got so angry, and upset, over Skype I had to hang up on him. I went across the room and opened my mouth to let out the wounded animal sounds I hadn't wanted him to hear.  Then I swore, and cried, and swore some more. Five minutes later, feeling more under control, I called him back and we resumed our stupid conversation.

I hate being angry at Ian, or anyone I love. What I hate more is being angry at something bigger, the world, the system, myself, and taking it out on my loved ones. That makes me feel like a monster and a coward. Ian is sorry for having let this ridiculous oops happen. I know he is. There is no need for me to rub it in, to shame him for it. But sometimes I need someone to blame. Someone to be angry with. Someone to pass off my frustration to. Anyway, he signed a contract to be my husband and I'm sure somewhere in the small print there was some part about taking the blame for each and every thing just so your spouse can feel better. Isn't there?

Thankfully, this got cleared up quickly and two days later, how did that happen, I got another e-mail saying I had been named as agent and could now pay the immigrant visa processing fee of $404. Lucky me.

I struggled with that online payment form for several days, yes days, and finally called a toll free number, was put on hold for approximately 25 minutes, and learned that I needed to use Internet Explorer in order for the form to work. Does Internet Explorer even exist anymore?
I spent a morning trying to download a compatible version of that to my macbook and gave up when the graphics were all wonky. I tried Safari instead and had success. You have paid!

This is boring, I know. I apologize for that.

Ian now has to navigate all this Affidavit of Support crap, proving he has been earning enough money over the years and won't be a financial burden to the U.S., blah, blah, blah.

He's degraded and deflated and not so elated about being back in France without us. I want so much to go back there and be with him but know it doesn't make sense financially, or family wise, or in any way.

As much as I like being home, I miss France. I miss helping Essie do her homework, spelling words for her in French, reading books in French, complaining about the French. It's getting more and more dreamlike. But having Ian there isn't helping us hang on to our time in France.

It's only sucking the romance out of the memories. What price, this little adventure of ours? What price?

I am so sorry for all of this madness you are dealing with while the one person you need by your side is the one who is just beyond your grasp. I am sending wishes out to the universe for a speedy delivery of the happy ending I know is headed your way.

Hi, Betsy. Don't blame yourself for being furious at your husband. How many times do moms and wives wish the buck didn't stop with us? That you could take your eyes off the road for a while and close your eyes, and your partner would take care of everything? Especially you, who have been the ultimate authority who had to get everything done, for so long. You have every right to wish that THIS time, you weren't carrying the weight of your family's well-being on your shoulder.

You've been incredibly steady for so long. I spaz out when my husband leaves for one friggin' week on a biz trip. The anger! The resentment! Kudos to you for taking care of business.

Oh, Betsy. My heart aches for you. However "temporary" this is all supposed to be, I can only imagine (after all these months) that "temporary" is the last thing it feels like.

Also - take heart that you are not the only one who feels the need to take your anger out on your loved one ... yes, I do believe there is something in the marriage fine print about that - at least it's what I tell my Mr. when I need to yell at someone and he is the lucky recipient. ;)

I read you religiously - both here and on Momfo, and am sending you tons of prayers & positive thoughts; anxiously awaiting the day I open my computer to see your blog titled "He's Home!"

Hugs to you and the girls!

Dude, take a break on yourself! If he HAD sent the form would you have gotten the email and been able to get the payment processed? And if not you'd be here beating youself up for that! See where I'm going here? Having to be the one to save everyone, from lice, immigration, or failing cars sets you up to feel like you MUST be perfect to function. You don't! You have the same right to occasionally fail or be a jerk as everyone else. No one expects you to be perfect except you.

Wait. Did I just try to comfort you by calling you a jerk?

Lauren A: Your comment was perfect I am a smiling jerk.

Just be as kind to yourself as you would be to another friend. You'll stumble out of the darkness of this awful, stupid, bureaucratic, lice-infested cave soon, I can feel it in my bones.

I can't say any more than the other poster. Hang in there. If humans were perfect, we'd be so boring. We needs to love ourselves flaws and all. You are allowed to get frustrated.

Betsy, hugs to you today, from me several states down, Liz in NJ. You know what? You do not have to apologize for being "boring" about this. At all. Yes, I know your blogging is your work, and for work, but this personal blog also feels like a support system for you, during all of this. And during all of this life, in general. I really think we readers dig you so much, support you so much, that we are rooting for you, and your family, and you get to complain, and share, and you get to have us feedback to you (yes, I'm using that as a verb!), and support you. It sucks that you are dealing with this. And, being a person who also has a lifelong dealing with depression myself, you are understandably depressed, even if you weren't a person prone to melancholy. But your photos also show you are still living life. Do not be so hard on yourself. Your job as their parent is NOT to be "perfect", I think it is to be human, and they see and learn that life has hard times, and you do not always feel rosy. Be gentle with yourself. I too am dealing with husband away, mine for business reasons, and man, it sucks the core strength out of you. Be gentle with yourself. (Is it okay I am using my comment to support you so much?! I hope so!) Hugs to you. I imagine you waking up now, or soon, in Vermont, and thinking ugh, blech, Monday, and you know what? My advice to my girlfriends, and to myself, has always been "Feel what you feel." You can feel gray and blue and gross, and so just function. And, if you want, say that outloud to your girls. You are so good with them overall, Betsy. So good. If you want, tell them outloud "Girls, I know I seem glum and down and grouchy, and I am. I miss Daddy, I am sad, but I want you to know that all these emotions are okay for me to feel, and for you to feel. It is part of life. Okay, what's for breakfast now?" Hugs to you. Would love to have coffee with you this morning in Vermont. lol. Take good care. Feel what you feel. I'm rootin' for ya.

Thanks, LizinNJ. This particular Monday was not so blechy, since we had a fantastic day of skiing yesterday and I have that pleasant soreness in my quads and glutes I haven't felt for a long time. Not to mention the memory of Isla doing the flying wedge down my favorite childhood slope....

I am sorry you are going through this Betsy. Being a first generation immigrant, I know the pain of dealing with INS. our green card process took 6 years! and all due to department of labor 'losing' our case and ofcourse no way to know, because when we send inquires, if they don't respond, then we have to assume its all ok, and they are 'working' on it. It took a new head of the dept to figure it all out in a day for things to progress. Feels like a dream now, all of that insecurity..
Wish you lots of luck in getting this resolved sooon.

I agree with Lauren with the rest of it :D

Being a gal of the tropics I am always amazed how much joy you get out of the damn snow!

Sending you lots of hugs...