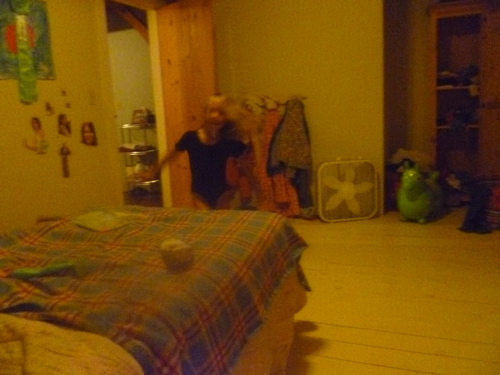 We went to a fundraiser concert on Saturday night and saw Anais Mitchell and her Hadestown orchestra. We love Anais. She's written a folk opera of sorts based on the tragic tale of Orpheus and Eurydice. (Bon Iver, Greg Brown and Ani DiFranco sing on the soundtrack.) Esther knows this story, in which two lovers are separated and almost come together again, but for a momentary lapse of faith on Orpheus' part and they are forever lost to each other.

"They let Orpheus through to Eurydice, but warned him very carefully: Eurydice would follow him into the light of the world and once she entered the sunlight she would be changed from a shade back to a woman. But if Orpheus doubted, if he looked back to see her, she would be lost to him forever."


Esther was mesmerized by the live musicians on the stage playing all these familiar songs we've been listening to so much. Isla, though initially excited to see that Anais Mitchell was "still alive,"  succumbed to hunger and whined for food while wriggling in my lap for the entire show. I somehow found myself caught out with a five year old and not a single edible or suckable morsel on my person. Still, we managed to sit the two hours without disturbing those around us too much. I did hear Esther hiss to Isla that she was going to kill her when they got home.

This wild and crazy Saturday night spit us out into a sleepy Sunday morning. I woke up with both girls in my bed, laughing hysterically. The laugh of the sleep deprived. Giddy

After Esther did a brief stint as a mother's helper for a friend of ours, we had the most truly lazy Sunday afternoon ever. The kind that makes you feel proud to have resisted the urge to get in the car and go somewhere, anywhere, just for the sake of mobility. Just because you can.

But today, although we certainly could have,  we didn't.

We stayed put. Lit a fire in the Finnish masonry stove. Got a little bored even.

Isla spotted a flock of turkeys out for a Sunday stroll through the wet meadow and wondered if they were friends or relatives.

I made banana bread. The kids ate it. I made peppermint tea. The kids drank it.

I lay on the couch and read the Sunday New York Times, Essie got me a blanket.

Esther and Isla dressed up and played "friend."

I took a nap and was "checked on" every fifteen minutes by Isla.

Isla got in bed with me, told me she didn't know what to do, so  I read Saint George and the Dragon to her.

Essie and Isla watched a few Cosby Show reruns on Netflix while I cooked dinner.

I left the funnies out for Esther to find. She found them and brought them to bed with her.

Isla did a little ballet dance for me and Ruby before bed.

Then we all lay down and turned the lights out.

What a great day!

My favorite way to spend a Sunday in autumn!
I feel lazy and sleepy just hearing about your day.