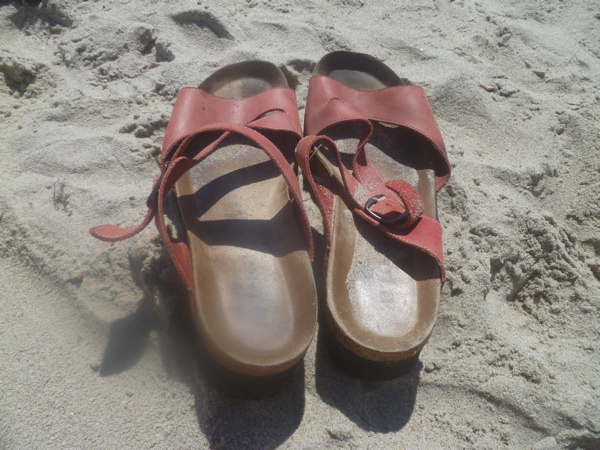 As I explain, with varying levels of eloquence, over here,  I attempted an internet cleanse last week.

Speaking of varying levels, my success at this was questionable. While I proved incapable of physically leaving my laptop behind on vacation, I did manage to leave it behind mentally for some significant chunks of time. It spent most of the week in the bag, despite the temptation to keep up with each and every detail of the trail of destruction Hurricane Irene lay down in Vermont.

And I didn't blog for a whole four days. Where's my medal?

Though no one promised this, I am still waiting for the release of toxins and outpouring of creativity that I was hoping might come from all that wholesome, fibrous, face-to-face interaction with real live humans and real live nature, rather than this here screen.

I did, however, sleep quite well, and manage to scribble a few pages in the legal pad I purchased at the supermarket, trying to replicate what I read was J.K. Rowling's writing habits. Alas, the next Harry Potter-like book did not come pouring out of my head either.

All babbling aside, Maine was fabulous in a "life is blessed if you can manage to deflect, or ignore, the constant family tension" kind of way.

I love the sea. It slays me with its perfection. And I love trying out the fantasy of living right next to it, day in and day out, hearing it breathing, sighing, ranting, heaving itself again and again onto the land,  and just having it there, stretching like a massive dark mirror, beckoning to you, right outside the front door.

As we walked along one of the many dirt roads, lined with beach cottages, Esther intimated she felt the same way. I felt compelled to apologize to her, to warn her about the torpor learning to love the sea  will cause her for the rest of her life.

"This place can ruin you," I said. "Just like Paris, and, on some level, Vermont can ruin you. You will forever be comparing every place you go and live to this place. And even though you know it's not reality, and it wouldn't feel this perfectly blissful if you lived here every day, you won't be able to help missing it, on some level, all the time."

Esther said nothing, but I am fairly sure she gets it, already. 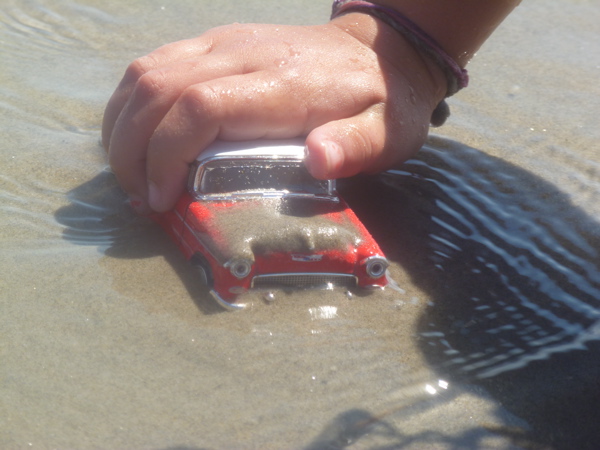 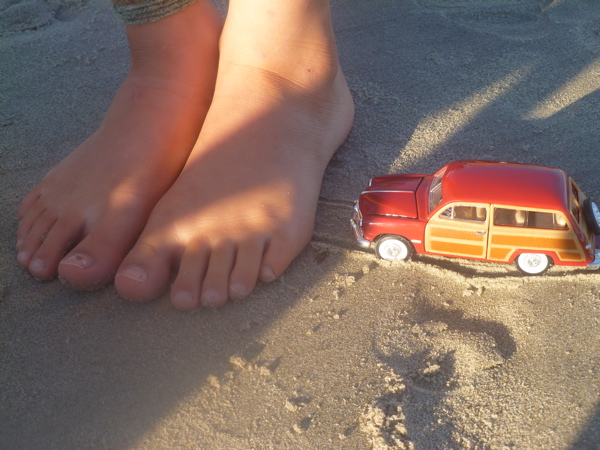 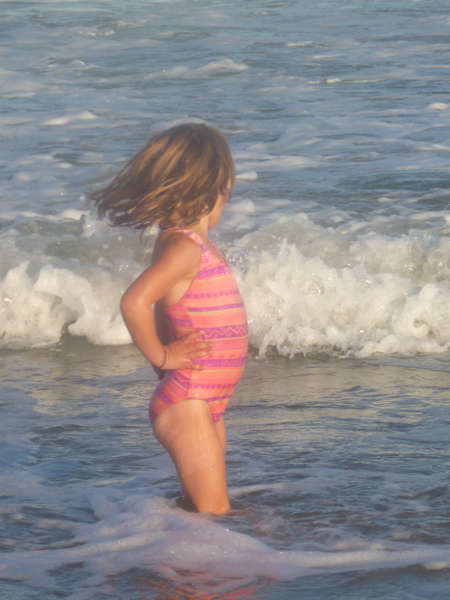 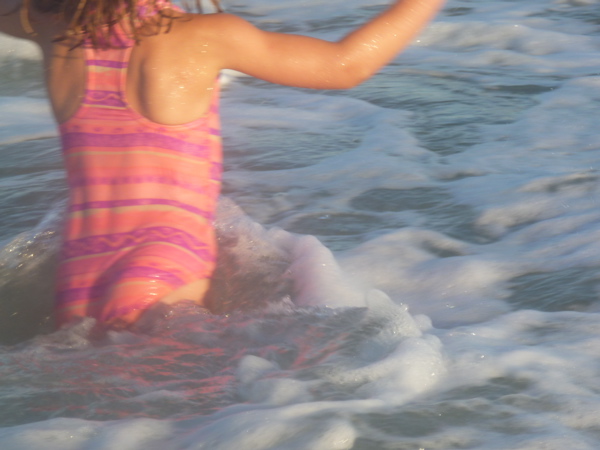 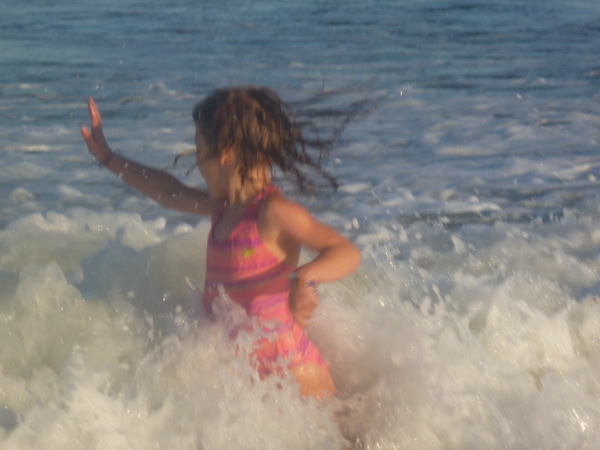 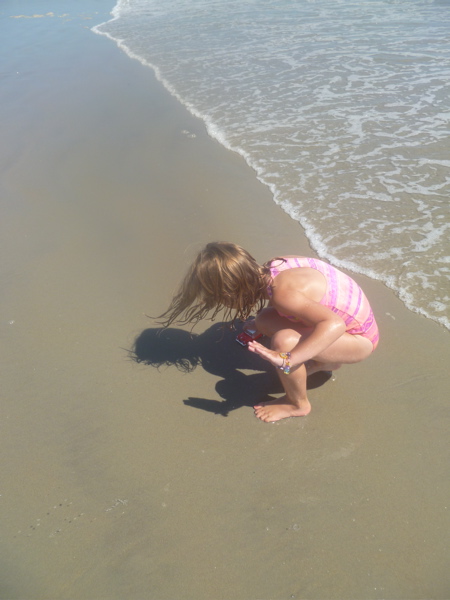 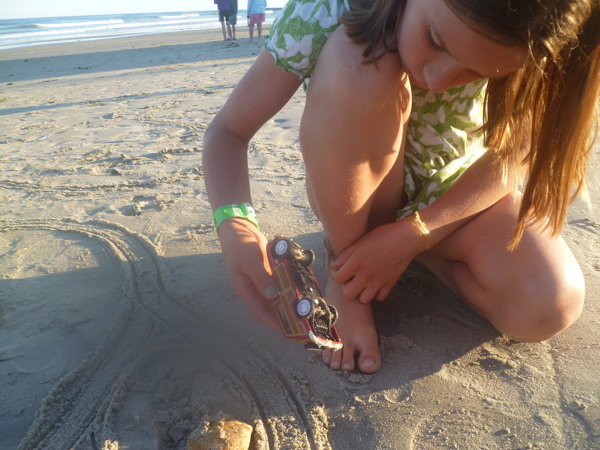 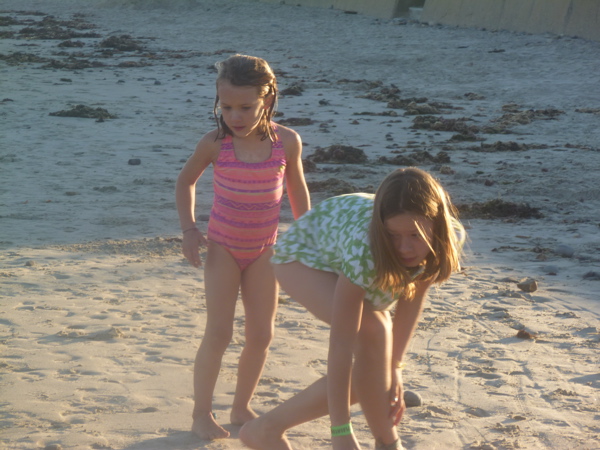 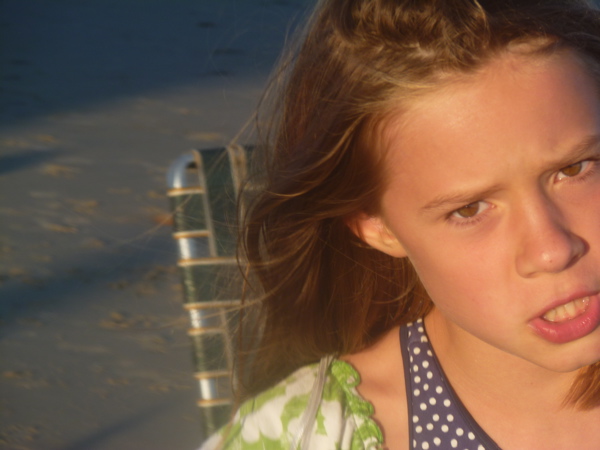 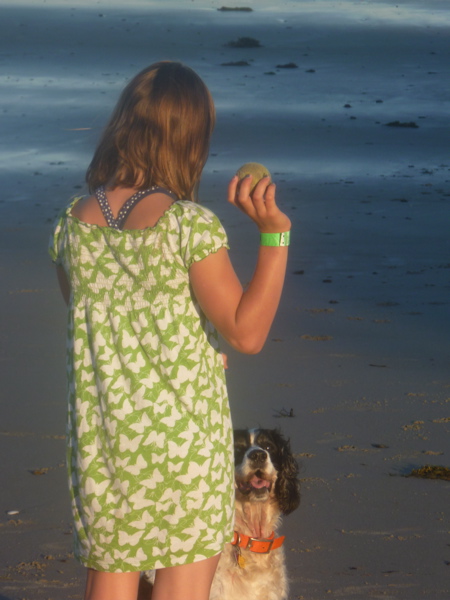 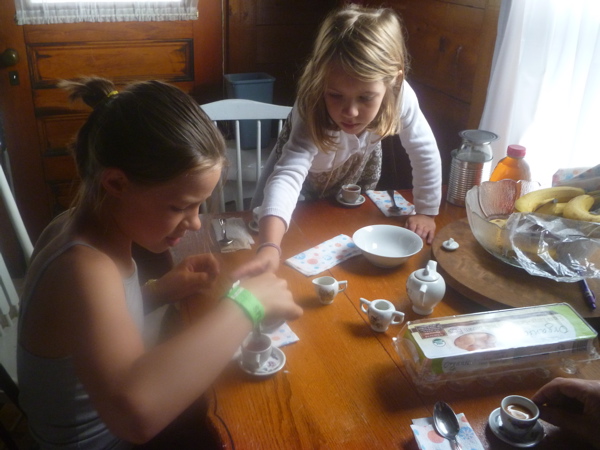 If you look carefully, you will see the picture that explains why I take far more pictures of Isla, lately, than I do of Esther.

I completely understand why there are more pix of Isla. We went to the beach for a week and I came with only one pix of me (I'm always behind the camera) and almost none of my oldest daughter. Those that I have are of her retreating back, blocking hand, or snarling face:)

You did it again Betsy. Brought tears to my eyes. We've been home a week now and I miss it. The sea, beckoning me from every turn. I could tell the day's weather by just looking out at it... The last few days we spent in Sydney were at these serviced apartments by the beach. We'd walk down to the cafe for breakfast by the beach and despite the wintery weather (windy and slightly rainy), we managed to have a few final hours of sand play. And the nights, well they're magical. It somehow seems louder, bigger at night, crashing against the beach.

Your words and your pictures transport me. For me, that's better than any Harry Potter book...

mooserbeans: My sister took a few shots of me. Of course I hate them.

Was Living Down Under: You must be suffering from some serious culture shock. A friend told me recently that culture shock is essentially another word for depression. I think that explains it perfectly. Mine is still going strong four months later. Sigh. Bon courage!

That's so funny that you pointed out the picture of why you're taking more photos of Isla lately. When I saw that picture of Esther I immediately thought she was saying, "Will you get that ... camera out of my face!"

Wow- PERFECT description of the ocean. We too are sea- struck around here and I miss it. Thanks for yet another great post. Long time reader... You are an inspiration to rookie bloggers like me.

thanks Betsy. Good to know it's "perfectly normal" even though I feel so far from normal. Tomorrow is the first day of school and it's finally hit me. My little girl is starting preschool and it's so different from the preschool her sister went to in Sydney it's freaking me out. I know it's me who's resisting the change. She'll be fine. And I have to drive. I hate driving. I haven't driven in 3 years!

Sorry for whinging. I'm thinking I need to start a diary or something just to vent all my frustrations and indulge in a little self-pity. Coz I'm afraid I'm going to lose a whole lot of friends if I start every sentence with "well in Sydney..."

"You will forever be comparing every place you go and live to this place. And even though you know it's not reality, and it wouldn't feel this perfectly blissful if you lived here every day, you won't be able to help missing it, on some level, all the time."

That is it. Exactly. I have that to a place in Uvalde, TX- cold clear river, expansive river rock banks, chalk cliffs that glow at night, and turning below the bright Milky Way all night long. I remember when it hit me- "So this is it?" I thought. It's imprinted on me now. I am forever carrying it with me, and I dream of it when I need comfort.

And had your Thyroid checked, lady? Because that was it for me with the creeping sadness I couldn't shake...

Lauren A.: I'm intrigued about your thyroid. I'd love to have something physical to blame for my melancholy underpinnings. Tell me more...

Seven months ago, my husband and I relocated 8 hours away from the Oregon coast. We just moved back a week ago. I couldn't stand not hearing the ocean crashing when I stepped outside my door, the absence of the briney smell in the air, or the mist hanging heavily over the tree tops on chilly mornings. The beach definitely claims a little piece of your soul. Glad you and your girls had such a good time!

Emily: Yes. It's the silence that gets me when we first come home. Not hearing that soothing, steady roar.
The Oregon Coast is beautiful. I especially love the strawberry shortcake stands on the roadsides on the route between Salem and the coast. I've been to that beach with the big, famous rocks jutting out of the sand, can't remember the name.

Lauren A.: I guess that would be "melancholic underpinnings." :)

Now I miss vacation more than ever. Sandy children aside, the ocean is cathartic.

You don't even need to look closely to see why beautiful Esther isn't in more pictures.

Oh lets see- hypothyroidism causes lots of symptoms. For me it wasn't full blown depression, just a general topping out at a 6-7 instead of ever reaching 10 on a happiness scale, with dips into occasionally worse than that. My energy was low, like i could never catch up enough on sleep. My joints hurt, hands felt arthritic, back felt like brittle glass. Feet were always cold... Hair was falling out, couldn't concentrate etc. I wasn't gaining weight, though thats the best known symptom most people get. Worst part was it all progressed so slowly, i didn't know how bad it had gotten. Some people don't get that bad though. It's really common in women, especially after having children...

I get it too, and I think you mean Cannon Beach just outside of Portland Betsy? I spent several holidays at the Oregon coast though a piece of my heart lies anywhere in the Pacific Northwest, there is something mystical about it.