What I've learned from an incontinent dog

In my darkest hours, when I truly cannot stop wondering if we made a big mistake by rudely dumping Europe and getting back together with Vermont, and I'm lost in idealistic reveries of wandering the Marais district of Paris, or taking that last top- to- bottom run of the day in Courchevel, after downing the $8 chocolat chaud, I am often interrupted by the sounds of heavy panting, licking, whining, or overly- loud breathing of my aged dog, Ruby.

Only today did it occur to me that Ruby might be trying to tell me something. Something that goes like this: "Get over yourself, already. What about me, you heartless hussy? Are you not content, ecstatic even, to be reunited with your long-lost first born dog? Do you not remember the suffering I endured, while you were away?"

And my dog has a point. While she was adored and well cared for by my parents, pats and cookies on demand, I know she missed her family. And her family missed her. We returned home just in time to join her in the autumn of her life. She is thirteen. She is our dog. We love her. She is not long for this life. She has experienced one old-dog problem after another since we got back, including that which should probably be addressed by a doggie psychologist, but which I'm hoping can be resolved with good old fashioned love, affection and constant reassurance from her clan.

Adding to the long list of hot spots, fungal skin rash, and worms, she has recently developed incontinence.

Poor girl. I couldnt' figure out what was making her so.. moist, on her back end for days. I thought she was licking herself, which she was, but never once did I suspect it was urine. Only after a friend suggested incontinence did I stick my head into her doggie bed and sniff deeply to discover that, yup, she's been wetting her pants. Bad mommy.

I suppose the fact that she doesn't wear pants gives me some excuse. And she hasn't been leaving puddles around, just wet spots where her perpetually wet rear end has lain. She is a leaky dog. 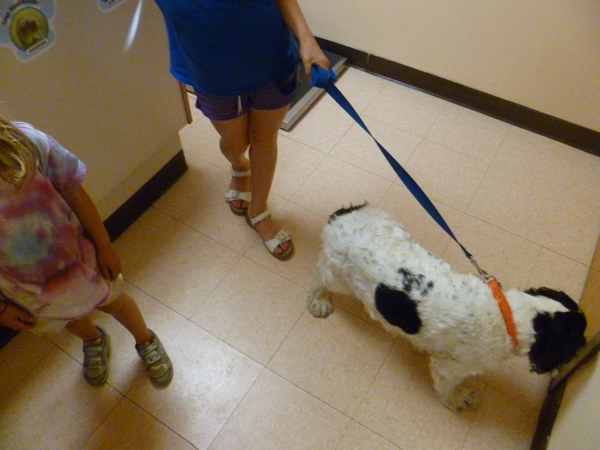 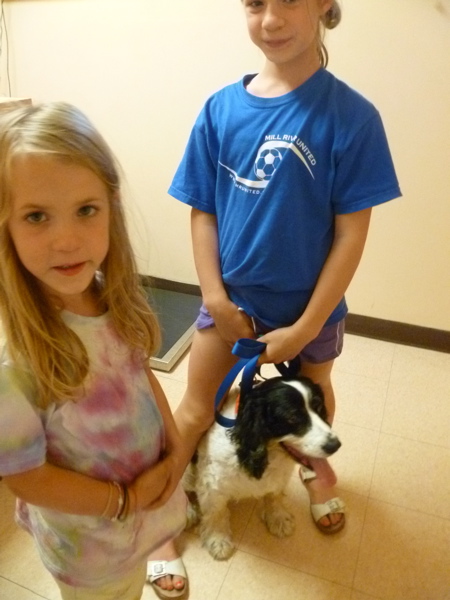 Turns out, I hope, that the leakage has to do with a negative reaction, common to old dogs, to prednisone, a drug she was prescribed for her festering under-the-chin hotspot. The hotspot I only discovered after giving her a bath with special shampoo for her fungus issue.

Poor girl, who knows how long this raw wound has been hiding out in her jowls. It reminds me of the time I was in the  pediatrician's office with my beautiful six-month -old baby Esther, nursing her peacefully and proudly, while waiting for the doctor, and I noticed a foul smell. Where was it coming from? I checked her diaper. Nothing. I snuffled around her like only a mother can, and discovered the pong was coming from the vicinity of her chin. I forced her head back, no easy task, and there, hidden deep under the delicious folds of baby fat, was the most disgusting, gooey, stinky patch of last week's, or month's, drooled milk that had turned into a festering science experiment. I quickly stood up, she was still latched on, and wetted a paper towel at the sink and started to wipe it away when the doctor came in. Busted!

I was so ashamed. How could I have missed this on my sweet baby? I am not perfect after all.

At least I figured this wet-bottom dog problem out. As scattered as I am lately, it could have gone on much longer. I've been giving her daily baths and changing her bedding each night and, now that she's been off the Prednisone for a few days, she seems to have rounded the bend. This morning was the first morning in a solid week she woke up dry. 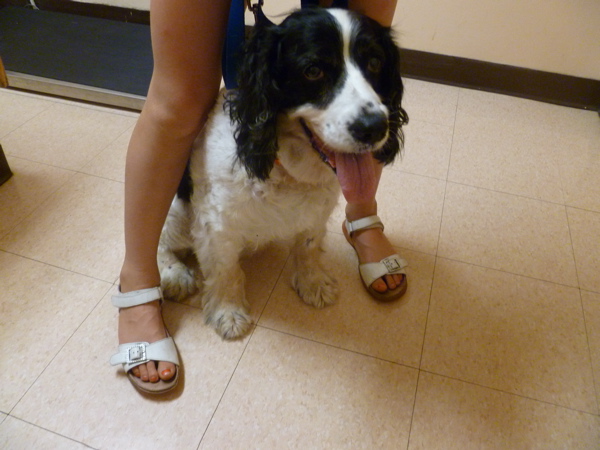 I love Springer Spaniels! My first doggy was a rescued Springer named Blizzard. He was an old soul and he did nothing his entire life but love his family. A Springer's Life Mission Statement is to Protect and Herd His/Her Children :D

Simply, your pictures of Ruby and her Humans make me smile.

"He was an old soul and he did nothing his entire life but love his family. A Springer's Life Mission Statement is to Protect and Herd His/Her Children :D"

Oh I love this. There is no better description of Ruby. She stayed upstairs this morning, as she often does, until both girls woke up. They should be called Sentinel Spaniels.

We have a springer/lab mix, Iris. Oh golly do I love, love, love this dog. Is it because she loves me back so much? I loved my cats for 17+ years, but it was always a bit doubtful if they really loved me back. I'm glad you're back with your dog.

the goo in the deliciously fat baby neck rolls! I well remember that.....why does no one mention that one needs to look there? :)

Aw Bets, I feel both your longing and your pain. We left Geneva 6 months ago for parts down under and everyday I think about skiing that last run at Les Gets or the Marais district of Paris and the 3-hour TGV ride from Geneva - heavy sigh but movin' on. My almost-13 year old dog made the journey from Canada to Europe with us for 5 years and is now in Melbourne with us. Sadly there is no denying her advancing age and occasional leakiness too but I take it a privilege and my duty to shepard her through her old age with love and dignity. As always, adore your blog!

Ah, the suspicious smell from a sweet baby! I know it well. In DD's case, it was similar. (Blearrghhh!)

Lovely Ruby. I love dogs, can't imagine life without mine... although I could do without the mountains of hair she leaves everywhere.

Enjoy all of your time with her. Dogs are such a special part of our families. We lost our dog this winter. It isn't the same without a furry friend around.

OMG! Isla looks *exactly* like you! You should feel like you're looking in the mirror when you're looking at her : ) I think you are so lucky for having two beautiful children.

I have a black and white cocker spaniel who is now dealing with bathroom issues, skin fungus (on prednisone) and basically the same stuff you are. I can SO RELATE! She's my firstborn as well and is it wrong if I wish she does not make it 4 more years to age 13? She's falling apart now as it is...... We're expecting though and I cannot wait for her to see the baby, she's the perfect mommy dog and it'll probably bring the pep in her step to have a newbie around to worry about.

Special -K: Black and white dogs are particularly handy with babies in that they provide the perfect visual stimulation. We used to call Ruby, "stimudog" for this very reason. Esther laughed everytime she walked by simply because she enjoyed the contrast. Good luck. And, it's interesting to hear you are dealing with some of the same less-pleasant doggy issues.

I found that gross goo behind my firstborn's ears- blarg. I felt like a terible mother. What mother doesn't scrub behind their kids' ears? Isn't it a rule, or something?

Our black and white Border Collie/ St. Bernard mix has the same markings and has skin issues too. Hot spots her entire life and skin allergies...I mean come on! What dog is allergic to grass?! Mine, as it turns out. But shampooing her every other week with Neutrogena T Gel has helped a lot. (I forget where I read that tip, but it's been a lifesaver) Her skin no longer has that angry red look under her white fur. She still needs the occasional Pred shot- but it isn't 3-4 times a year, every year, now.

Try a spoonful of canned pumpkin with each feeding... not sure why, but it really helps with itchy skin and hotspots... it has worked for both my dogs..we've gone from "flaky" to shiny and itch free in a couple of weeks.
When I started I figured that if it didn't work, I could always make pumpkin bread! :-)

Ruby looks like a truly wonderful dog; I'm sure you are all deep-down content to be together again (now that the incontinence mystery is solved... we hope).

Can totally relate to the "pong" of baby stink under the chin... Thought I was the only "bad" mommy out there - thanks for the reassurance that I'm not alone. ;)

As always, your blog is a pleasure to read.

Isn't that a cute dog? I love my dog too. She has this way of making me feel better and inspires me to be a better person, she is cuddly and does quirky things like putting her head on my shoulder while I’m driving or sticking her head under the bed.

I love dogs, can't imagine life without mine... although I could do without the mountains of hair she leaves everywhere. incontinent dogs