I found two mice dead in one trap this morning.

They looked so impossibly cute, side by side, their heads caught, like little, gray, furry Marie Antoinettes, in that horrible spring.

While I feel only the vaguest sympathy for the cheeky mice who've died in this kitchen, the bird who thought our kitchen window was the sky the other morning pulled at my heart strings.

The unmistakable thump on the window that faces the kitchen sink pulled me out onto the lawn in search of the poor, unfortunate soul with the lofty, now broken, dreams.

It's a very distinctive sound, the thump of a bird against a window. It makes me wince. It also makes me stop and consider, "Do I go out there and open my eyes to the sadder facts of life, or do I just keep sitting here, typing away on my computer, feigning immunity to nature's wicked ways?

At first I was relieved to see nothing there. But, with closer inspection, I found a young chestnut- sided warbler (I think that's what it was.) lying in the grass, still warm, but dead as a doornail. I stroked its beautiful yellow and black feathers lightly with my index finger. Feeling its warmth, its life still burning against my finger tip, I felt compelled to pick it up and see if it wasn’t just stunned. I placed it in the palm of my left hand and saw it had just caught, clever little birdie, a moth in its tiny beak. 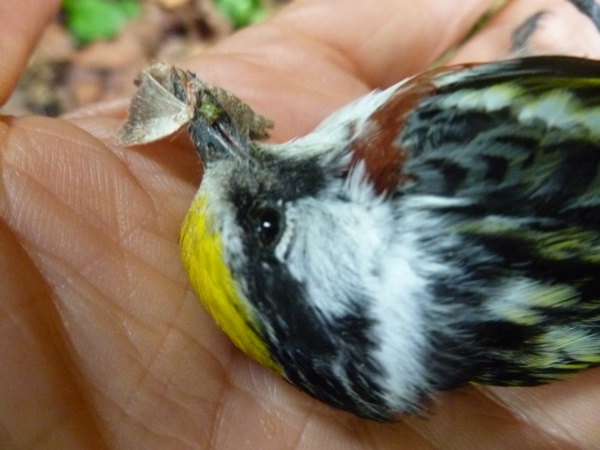 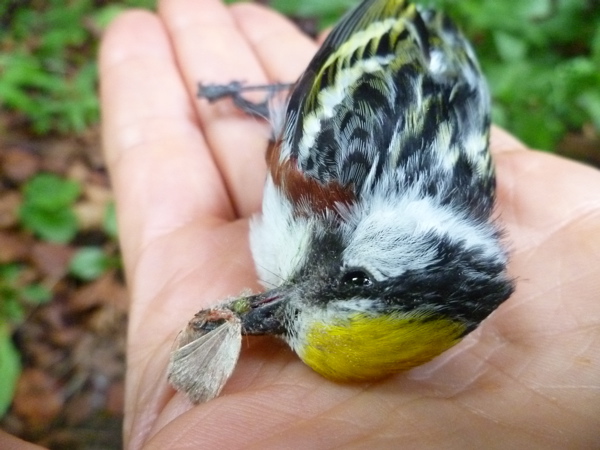 It had probably been rushing back home, where is home, to show its mother how clever it was. It never made it home because there in the glass of our kitchen window, loomed a false world, a deadly trap, a siren, a cruel, deadly mirage.

The gray sky, the green canopy, the leaves shivering in the breeze, were all perfectlly reflected there. A glass ceiling? 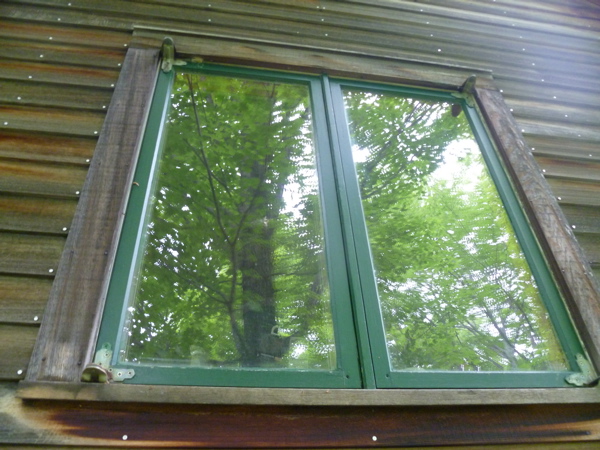 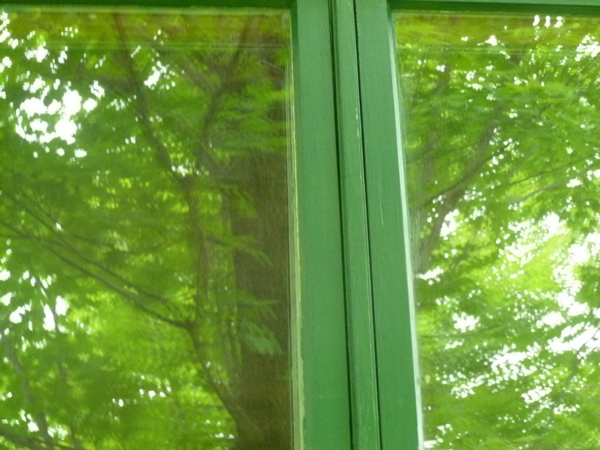 I could imagine, not only imagine, but empathize with, that sweet little bird flying full speed towards this illusory world, only to meet with the most solid form of resistance. No give whatsoever. Just pure, obstinate deflection. Solid. A see through wall. Poor thing.

I did not cry.

But as I held it there, a soft breeze tiptoed across its lifeless body-- its eyes flat, opaque-- and snaked under its tail feathers making them flutter up and down, up and down, as if it were alive.

It is a horrible, distinctive sound, isn't it? It's sort of like a child's head hitting concrete. Not that I'd have any experience with that. :(

As a biologist, I concur with your identification. Rest in peace, champion moth-catcher.

I always feel so guilty that our living room transom window is such a magnet for the doves of our neighborhood. I bought a sun catcher recently, which seems to have cut down on the number of bird tragedies significantly.

Thanks for sharing such a beautiful eulogy for a tender, lovely creature.

Betsy, you are truly a fabulous writer! What an eloquent tribute! Rest in Peace, little winged creature.

So sad, but so beautifully written-about; like Kathleen writes, a "beautiful eulogy."

Reading this gave me pause this morning as I think about how brief life can be, and how it can all change in an instant. It made me think about this, too: I wonder if sometimes I am I chasing after that illusory world and if could lead to my demise as well... It made me think about being mindful about my life, and paying attention to what's before me. So thoughtful I've become, reading this! Thank you for that. It's a fitting tribute to the warbler.

On a completely other note (because I have been meaning to comment on the previous post for days now), I'm so glad for your floors! They look beautiful. And while it has its sadness, it moments like this with the bird, I am so glad you are back in your home environment, and that bit by bit, piece by piece, things are coming together, old in some ways, but completely new in others. I'm glad that you are back in nature to observe life (and sometimes death) in the beautiful place in which you live. I hope that you continue to find your groove there, Betsy. :)

I simply love this piece. Thanks.

Karin: Thanks.
"I wonder if sometimes I am I chasing after that illusory world and if could lead to my demise as well... It made me think about being mindful about my life, and paying attention to what's before me."

Me too. I am beginning to see my computer screen as this false world. Sometimes I see myself reflected, staring, dumb, and it snaps me out of my stupor. "There's nothing in there, turn your eyes back to the real world," I think.

Kathleen: Thanks for reading my eulogy. A sun catcher is a good idea.

Mari: Thanks for reading. Going to check out your website now.

Oh, I am so touched by your photos. I feel like I want to cry for that little bird.....

A lovely post, and the photos are amazing! A week or two ago, I found a dead, newly hatched chick of some kind on the hood of my car. At first I mistook it for a pink blossom of some kind, but what a shock to see its face. I wasn't parked under a tree, and I wonder what circumstances brought it to my car. It didn't really look fully developed enough to live, so I wonder if something tried to eat the egg but somehow lost what was inside.

Beautiful. Your writing is magical.

Betsy, I first found you on babycenter and I absolutely love reading your blog. This is so beautiful and brought a tear to my eye. Thank you for reminding us of how delicate and precious life is.