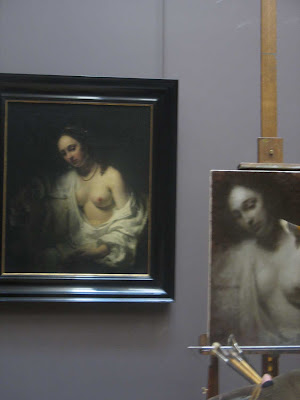 We spent most of the weekend sighing deeply in Paris, the city of lights, the most romantic city in the world, a city that can make the most monogamous of women imagine what it might be like to have a secret rendezvous with some mysterious, silky-haired, strong jawed man in one of the dozens of inviting, dimly- lit, romantic, back-alley cafe's she passes as she carries her snotty nosed, whining, tired four-year-old on her back.

Oh yes, that sighing, that was exasperation, not passion.

That was frustration, not stimulation.

That was our maxed out patience asking us, "What were you expecting, bringing a constipated four-year-old to Paris on the coldest weekend of the winter?" Duh.

Undaunted, I ventured out alone one late afternoon to explore and renew and cool down. While exploring, I somehow ended up in the underwear section of H&M-- I know, not very romantic but they were trying-- staring at a rack of ridiculous, totally uncomfortable- looking bras and panties and wondering if...... just if.... I could pull it off. And did I really want to. And, if I wanted to, where and when, and how?

In the end I settled for some bottoms only, not even frilly, but black and kind- of- sexy -boy-shorts style. See, I'm hopeless.

On my way back home I stopped into this specialty chocolate shop and bought some chocolate and one of the most delicious, hedonistic, cups of hot chocolate I have ever ingested. It was, exactly as described in Polar Express, like a melted chocolate bar.

Anyways, I put my new underwear on this morning, wondering if they might make me at least feel as if I have a romantic bone in my body. But no, all I felt, after walking several blocks through Paris, was bunchy fabric stuck between my cheeks. Yes I was that American woman in Paris, stopping in the middle of the Place de l'Opera, to pick her wedgie. Honestly, who, over 40, buys underwear at H&M?

Leaving Paris on the train I stared at my husband, who with Isla on his lap, sticking her fingers up his nose, was still sighing deeply, dying to get this little overpriced mini-vacation over and done with. I scribbled out a little love poem in my journal, something to the tune of

Then I folded it up tiny and passed it to him. He opened, it, read it, smiled, and said

Then, before I could even sit back and bask in the tiniest glimmer of weary, downtrodden romance, he said,

You've got spinach in your teeth.

More about husbands and wives in Paris here at BabyCenter.
Posted by Betsy at 9:13 AM

You guys sound about as romantic as my husband and I are! :D Which I think is just fine -so long as both parties are on the same page. At least you had the setting right - don't you just LOVE Paris! Er, minus the whining and little fingers in nostrils. Happy Valentine's Day!

LOL Betsy, I'm glad I'm not the only hopeless case. Hubby and I ate some pasta off our laps whilst watching the new episode of Dr Who. Not glamorous or exciting, but enjoyable. If I were you I'd just leave about 90% of the story out and simply say "I spent Valentine's Day in Paris!"

I gave my husband a Valentine card about poop this year. Sigh. (Deeply.)

If you can't get romance in Paris the rest of us should just give up entirely. Hope you feel the love all year.

Dammit Betsy! Now I'm addicted to your blog. I am hopelessly hooked. Love, A Fellow Vermonter.

Sounds like you're a practical girl! I'd be so lost in a city where frivolity reins!

Thanks for stopping by my blog. I love to hear from readers. And good luck with the hearing aids!

I read through this after it was first posted but did not have a lot of time for commenting just then. I'm back, though, and wanted to tell you how much this post made me giggle and sigh with empathy and then giggle some more.

Oh Betsy -- everything from the cold to the constipation of a four-year-old to the bunchy underpants to the spinach in the teeth made me nod and smile.

But then, there was that chocolate, eh??? That's not nothin'. Just sayin'. :D

Hope things, if not necessarily more romantic, at least are settled back into a good place. :)

Oh and I am almost 42 and, while I was visiting my friend in the south of France, bought some sexy underwear at H&M for VD, tee hee. I've come back to Paris now and the stuff is still in the shopping bag, hahahahahaha. Paul's kids have been on vacation starting Friday, when I returned, and are spending time at our place for a few days, lol. Yeah. Kids kinda put a damper on a lot of things, eh? But then they would not be here if it were not for romance. I don't know if this is one of life's bonuses (kids are very special) or just a cruel joke (the-gods-must-be-laughing kind of a thing. It's probably a bit of both, huh), but it is what it is. We have been watching old episodes of "Project Runway" in bed into the wee hours, maybe with as much enjoyment as doing other things, lol. It's a pretty entertaining show. :D

Hope you get to come back to Paris soon when it is warmer and perhaps we can meet up and try another one of those hot chocolates, eh? :)

You are so funny!