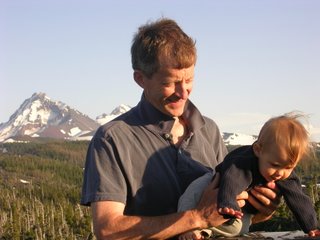 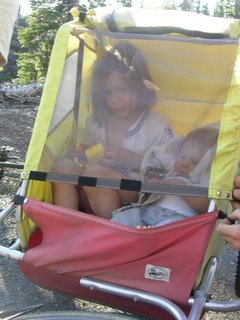 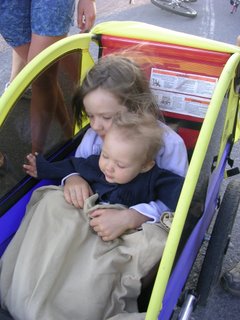 Just to generate the illusion that we are one of those active, adventurous families, here is a shot of Esther and Isla in their chariot. They were whisked up McKenzie Pass by my former snowboard trainer on his bicycle during our recent trip to Oregon. The reason he pulled them is because it was six miles uphill and neither Ian nor I could have made it before sunset, or at all.

We trailed behind on our own bikes, unencumbered by our children but still very much encumbered. My coach's uber-fit wife also pulled a trailer filled with camping gear, chicken, beets and a lemon pound cake. No lie. We picnicked atop a stone tower, much like Rapunzel's, overlooking the three sisters and an endless stretch of lava field. Isla fell asleep on the way down as Esther held her hand.

The whole experience was proof positive that, if prodded and coddled in just the right way, even the most tired and apathetic parents can rally their way out of the valley and onto the peaks
Posted by Betsy at 5:55 PM 2 comments:

in praise of books on tape

Waiting for Esther to turn four before I had another baby was the smartest thing I have ever done. Mostly. On the best days, I have an amazing little helper, like Gopher on the Love Boat, who fetches me things and keeps Isla distracted so I can put her diaper on without having to twist her leg off. On other days, I have a sort of live-in mother in law casting judgement and challenging my every decision. “That’s not a safe toy Mummy,” she said in the car the other day. “Remember, Isla can’t have that toy because the nose is about to fall off and she could choke on it.”

Now that we are feeding Isla some solid foods, Esther is full of opinions. “The doctor wouldn’t say that was okay for her to eat,” she said this morning as I was letting Isla chew on some applesauce soaked spelt waffle. “Well Essie,” I said. “Isla can eat lots of things, as long as they are soft and not something she might be allergic to.” “Well that doesn’t look safe to me,” she pressed on. Did someone call "Super Nanny"?

I do find her concern for her little sister's well being endearing. She puts on her little mother face and voice as she wipes the pureed peaches out of Isla's ear and gently teases her about her bad aim. She fetches me clean onesies and picks out new outfits when Isla gets out of the bath. She oozes nurturance.

On the other hand, she can get a bit too bossy and too invested in this little baby of hers. "She doesn’t want to sit that way, mummy, she wants to sit this way. I don’t think she needs to nurse again Mummy. Stop crying so much Isla, it’s annoying me. Don’t eat so much Isla, you’ll get fat and that’s not healthy and if you’re not healthy you’ll be sick.”

It's surprising really, that Esther doesn't hate her little sister. Our book time has been cut in half as a result of Isla's noisy, sticky, fidgety presence in this house. I had thought she would just join the party and enjoy books as I read them to Esther but she is more interested in eating books, page by page, than reading books so far. And Esther is into some really involved books lately, like Roald DAhl's BFG, C.S. Lewis' the Magician’s Nephew and our latest, the classic Pinnocchio, which we borrowed from the library with its amazingly lifelike illustrations of old world Italy. These wordy chapter books are a challenge to read at the end of a long day when mind fatigue has checked in and patience has checked out. Esther is insatiable and, after 30 straight minutes of reading, will beg for just one more page. The other night I feigned a sore throat just to get her to let me stop. I know, I know, who is the boss around here.

You would think with two adults in the house we could work out a balance. Instead, when bedtime hits, it's the mommy channel, all mommy all the time. It's not for lack of trying. Ian has honorable intentions, which are rendered completely ineffective by his little problem with selective narcolepsy. While staying up past midnight staring at a computer screen is no problem for him, lying down to read a children's book to his daughter without falling asleep within five minutes is, apparently, impossible.

So, more often than not, I read a quick chapter to Esther and plug her into the audio version of the BFG or Charlie and the Chocolate Factory or the Lion, the Witch and the Wardrobe, kiss her goodnight and sweep out of the room to rescue Daddy from an overtired Isla.

Last night I was so hot and sticky I refused to lay down with Esther on the same bed. “I’ll just lie over here,” I said, “and we can chat a bit.” I'm not sure what families do in Alaska in the summer time, but all this daylight makes us a little reckless. Who really wants to go to bed when it still looks like day out and it is as hot as it is most days and people are still mowing their lawns and daddy is outside pounding nails on our new barn.

A half hour after I left Esther's room she was standing next to me at the kitchen sink, like an apparition, in her little white underwear with her hair all stuck in sweaty strands to the back of her neck. “What’s daddy doing?” She asked as she slipped out the screen door and ran across the dusky meadow to the barn site. I surpressed the urge to be the bedtime sargeant and let her go without saying a word.

I watched her through the kitchen window and could just barely make out her half naked little self, looking like Mowgli of the Jungle Book, following her Daddy up a ladder to the highest point of the barn. I wanted to yell out my usual, "be careful" but the crickets and tree frogs and thick hanging air kept me quiet. I trusted that Ian was using his best judgement about where she climbed. She sees so little of him these days, I couldn’t let my fears prevent her from ending the day with her daddy.

When she came inside she was scratching like mad, having been bitten to death by mosquitos. When I finally got her to bed, after four ginger snaps and a glass of milk, I went back to our room to find a neat little pile of books she had picked out for Ian to read her earlier. The sight of them nearly broke my heart when I realized she had the evening planned and, as often happens, it all went awry and the tape machine went on.

I woke up around four to nurse Isla and there was a bayou moon, a perfect orange sliver, hanging low and sultry over the East mountain and I imagined, in better times, times with less flapping skin and less fatigue, I might have slid my hand across Ian’s smooth stomach and whispered in his ear, “Wanna play?”
Maybe next time.
Posted by Betsy at 6:55 PM 3 comments: