Playing ping pong with my father

The one enduring thing that makes my father’s eyes light up, besides my mother, of course , is an offer of a game of ping pong.

He loves that paddle in his hand. The focus required. The single mindedness. No conversation has the power to harness his mind like the challenge of hitting that little plastic ball back across the net to his opponent. No memory is more vivid it seems, than muscle memory.

Despite Alzheimer's and prostate cancer that's spread deeply into his bones, his hand-eye coordination has not suffered and may be the last to go. A true athlete-- his identity has always lurked somewhere in the tangles of his strong, coordinated physique and a mentality for constant motion. I like that. It fits.

I also like how he counts the hay bales each time we come into the back meadow on our walk. A walk that has become more slow and more predictable each day. The most predictable part, his stopping to count, out loud, how many hay bales there are dotting the scene in front of him. He wants, no needs, to keep track, as obsessively as he once kept track of his checking account balance. 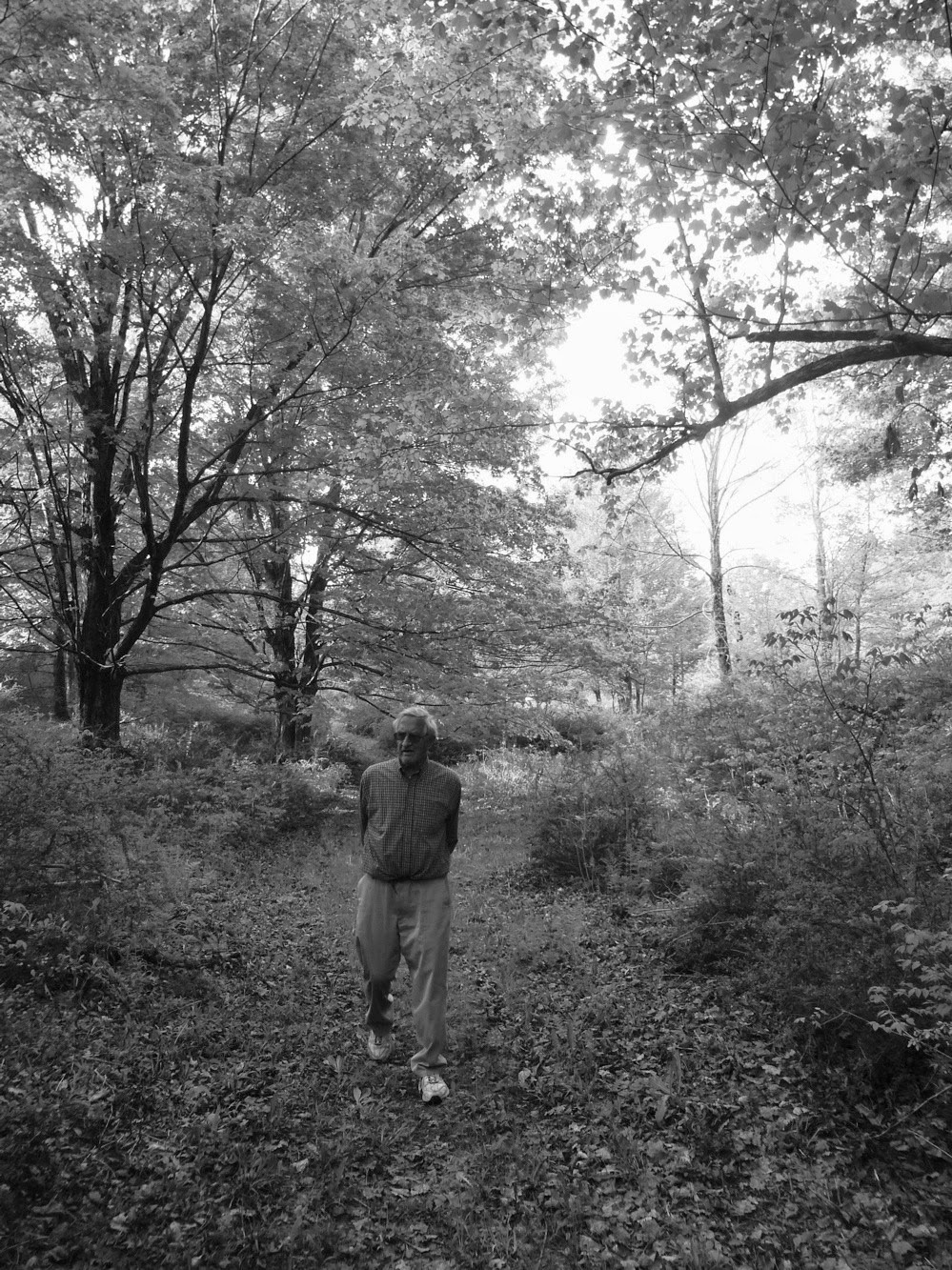 And the chanting..."Yes, yes, Christ yes"  that has become part of his day, as if he were being preached to by some unheard preacher and agrees with everything he says.

His legs have grown wobbly, unreliable.

He has moments of belligerence.
If you don’t stop that I’ll smack your butt until you are black and blue.

Did someone say that to him as a child? I would ask him, but I know he’s already forgotten what he said.

“What are you doing?” he sometimes says to Isla, in that cold, accusatory voice, when she’s being too boisterous around him. He sometimes even says it to me, when I’ve made too much noise, or moved too suddenly for his liking. Too much or his scattered brain and burned out nervous system to handle.

But mostly, his voice and demeanor are soft.

His body moves so slowly. He sleeps incessantly, as if he's being pulled under by a force that we can’t see. But it’s strong. It’s constantly pulling him, every waking hour. Pulling him back, pulling him down.

It's impossible to know what he's experiencing. When he exclaims "Sonofabitch, Sonofabitch, and "Stop it, you bitch, you bastard,"  is he talking to the cancer? Or is he cursing the darkness that is stealing his mind?

The moments come in such short bursts he can’t answer when I ask, “What's the matter, dad?”

It’s something no one can see. Something discreet and deadly. A thief.

His legs are wobbly. He fell in the bathroom yesterday, a colossal clatter, luckily saved by the toilet before he hit the floor.

Basic dressing and undressing stymies him:
Do shoes come before pants? Do I need two belts? Am I unbuttoning or buttoning? Am I going to bed or waking up? Am I coming or going?

He’s gone so alarmingly quiet, my dad.  Because he can’t stop the clicking of his brain. It's like a wheel and he can’t make it stop. Can't make it settle firmly on the right topic. He can't contribute because we are, everything is, moving too fast for him.

Or is he moving too fast for us? I don’t know.

Now he’s often without a voice. Speechless. Nodding. Because speaking takes too much energy, or because he just can't remember the words. The words aren’t making themselves available fast enough. He can’t find them in time. Not the right ones.

His eyes look so vulnerable. His hands are still so big and strong. He uses them to grab mine each time I help him get his arm through his shirtsleeve. He grabs my hand with such abrupt firmness. Such desperate, fatherly warmth.

It startles me, every time.

Oh Betsy your writing is so beautiful. I am so glad that you are getting to spend time with you father and that you can look at it through this lens. Alzheimer's is a nasty thief as is cancer, I wish you father peace and good times.

I want to say somthing, but i'm not sure what to say. I wish you all peace.

Beautiful writing, as always. Please never stop writing!
I am sorry about your dad and what you all are going through. My dad is showing early signs of alzheimers. It's so scary.

Betsy – I know it may seem odd, with my only knowing you through your beautiful writing & posts, but you & your father (& your mum) have been in my thoughts over the past few months. I think it's a testament to the power of your words & images.

Anyway, your posts about him remind me of when I first read "Bridge to Terabithia" as a kid & realized that there can still be so much beauty & wonder in the midst of sadness. Thank you for continuing to look for & share that beauty & wonder with all of us.

I've written and re-written a message here several times and none seem to come out right. Navigating illness in the family is never easy - particularly when it's a parent. I'm glad you're still able to spend time with him. He lives in the moment and it's great that you're also able to enjoy moments with him - as painful as some of them are to watch.

I'm sending good wishes and peace also - to you, your siblings, your mum and your dad.

Dear Betsy,
Your words are true and kind and strong. I love you and your family. Doug and Joan were so kind to me always. I am am thankful that I was invited to your house for many delicious family dinners during my Vermont chapter. I feel you can never have too many elders and the things I learned from them...laughter, joy, jokes, tolerance, listening. Thank you, Doug and Joan. You all are now a part of my daily thoughts. Your Friend, Deb Wuersch - Jackson, WY

So nice of you to stop in and comment, Debra. Long time. I'm glad you have happy memories of my parents. I know they were always happy to have you.

My God, this is hard to read. My father also has Alzheimer 's, early onset, and is in the middle stages. He also is abrupt with my kids sometimes. This is so helpful to explain why. It's so hard to be constantly grieving him and to be thinking "Will this be me in twenty years?" I'm only 32, but it's the rare hereditary kind. Does it just stay this hard? Is there some kind of acceptance? Thank you so much for writing about this. And I'm so so sorry that you are able to.

Thank you for sharing. I know all of your followers have been thinking of you. XOXOXO always.

Betsy, I do so enjoy your writing, and I want to whole-heartedly agree with all the other comments here, sending your family peace and thanking you for sharing this with us, but especially Kathleen Trail's recognition that what makes this particular piece so powerful is the bittersweetness of the beauty in the midst of the pain and difficulty.

Thank you, all of you, for reading and taking the time to comment so thoughtfully. It means a lot to me. And, Kathleen, I will never forget reading that book to Esther. We were in England at Ian's mother's when I got to the part where the girl dies and I had to stop reading because it choked me up so badly. I was blindsided by emotion. It shocked Esther, who was only 8 at the time.

I knew what was coming when I read it aloud to my daughters and yet I couldn't get through that part or the last page, where Jess takes Mae Belle to Terabithia.

My daughters have since gotten used to me getting weepy in the middle of reading certain things. :)

I've been wondering how your father was doing, thank you for this beautiful update. I join the others in wishing your family, and especially your father, peace on his journey.

My father has Alzheimer's and his brother who passed 2 years ago also had it. In the end his brother would talk and laugh while sitting in his chair. When his wife would ask who he was talking with he would answer "Henry" which is their brother who had died 10 years before.

My father is still very much there, my mom sees it every day. The changes, how he is not the man she married. She still loves him but it is getting tough.

Your writing is very beautiful and I hope you are finding some peace in the moments with your father.

Whether it's about VT (some of my fondest memories of snowboarding), motherhood, winter.. well everything you write is wonderful- I have really enjoyed following your adventure. However, it does remind me of how fast time goes by...

The latest entry about your dad brought tears to my eyes. I remember your parents well and am sad to hear about his condition. I'm sorry.

Your daughters are beautiful, and are a wonderful mix of you and Ian.

Sending you my best from Alaska.

Thanks for reading and commenting, Rosey. So nice to hear from you! I hope you and your family are doing well....