The pond that Ruby loved 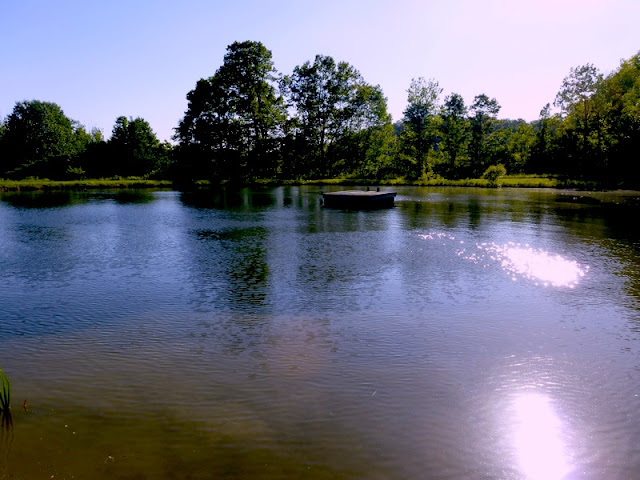 She picked and chose her ambulatory battles with discretion.

The neighbors' pond always proved worth the fight.

It took her a while to make the trip, but, stirred by years of fond remembrances, of strange humans, most of them children, fawning over her, throwing her sticks, and balls and feeding her scraps--potato chips, Smart Food, hot dogs, peanut butter and jelly sandwich crusts--her eating habits showed little discretion-- she persisted along the familiar route.

So frequently had she made that trip across the meadow, to our nearest neighbors' pond, the guests staying in the house that goes with the pond, the one that's rented out weekly by vacationers,  often felt compelled to mention Ruby in the guest book. Or so I've heard.

"The dog makes a nice addition."
"Ruby was an excellent rent-a-pet."
"You didn't mention the pond came complete with a stick-fetching -obsessed dog."
"We love Ruby."
"Where'd the dog go?
"No Ruby?"

She was lured over to the pond, originally, by the sound of splashing water and screaming children. And attention-starved dogs idea of heaven. She got into the habit of sneaking over there every time I let her outside.

But, her final summer, last summer, she rarely left the porch without being carried down the steps.

So I was surprised the first time she arrived at the pond ten minutes behind us. I imagined her loping, limping, her way across the meadow, through the tall grass, through the gap in the fallen stone wall, past the rope swing where the girls frequently stopped to play, their feet suddenly leaving the ground, and fly back and forth over her head.

She'd reach the crest of our neighbors' sloped, closely-shorn lawn and know it was all downhill from there. She saw us before she heard us. Neither her eyes nor her floppy ears worked all that well. But her nose never failed her. And her sense of place endured.

Straight across the short sandy beach and into the murky water she'd crash. She lapped up the coolness and lay down her weary, hot body in the soft muck at the pond's edge, letting the water soak and soothe her often raw underbelly and sending her fleas, her new permanent guests, curse them, scrambling for higher ground.

Then she'd get up and snuffle her way to the shade of the baby Aspens that encroach, ever further, on the beach, and attempt a few full-body shakes that sometimes shook her right off her  feet, and collapse in a heap of panting hair, flesh, bone and devotion.

And there she stayed, panting and whining, until  it was time to go back home. She had found her people. Her work was done.

I usually carried her back. Her damp, pungent warmth pressed through my thin bathing suit and propelled me onward, helped me to ignore the cumbersome weight of her that made my back and arms ache. My kids did not get carried that far when they were that big.

She surrendered to the ride. And I know she would have said thank you if she could.

We've been back to that pond a few times this summer.  And every time I'm there I find myself expecting, against all reason, to see her sweet face, black head and patches around her sad eyes split down the middle by a white blaze, followed by her insistent white paws,  paws that she used like hands to reach out to us with,  and her careering caboose of a back end, coming over the rise of the hill.

But she never does appear. She's chosen to stay, wherever she is. 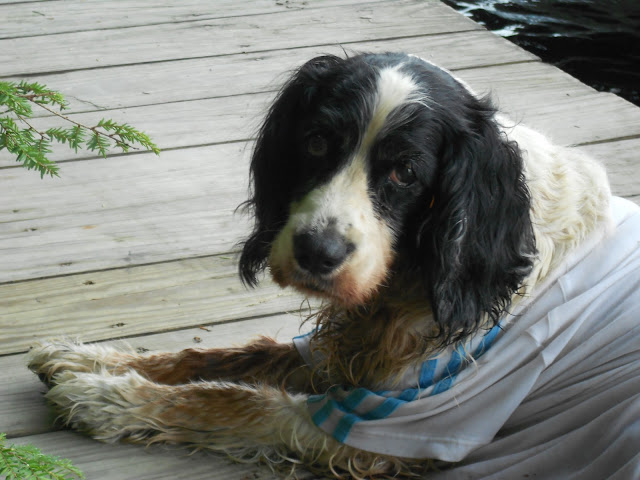 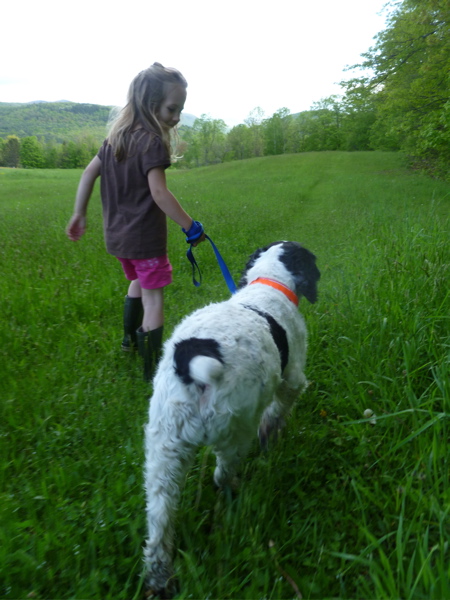 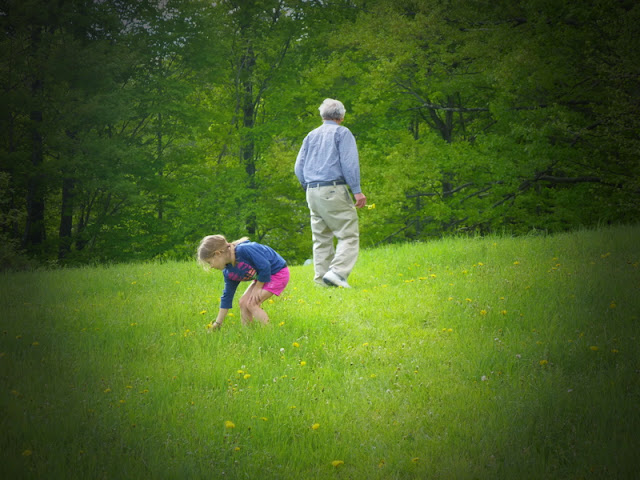 I only just noticed, now that it's on the big screen, that my dad is holding a dandelion, or two, in his hand in these pictures. I'm quite sure he didn't actually bend down to pick them, but Isla, his grandflowerchild, gave them to him as an offering of love and kindness and, I'm guessing, respect.

Their affection is mutual and not remotely affected by the fact that my father's short-term memory has been riddled by the degenerative effects of Alzheimer's.

In fact, my dad is more on the level of his grandchildren than ever before. More able to be and stay in the moment, each moment as it comes to him in steady increments, unfurling like a ball of string he's released from his own hand.  He has no agenda, at least not an inflexible one. He's always free to engage, to detain, to entertain. The perfect Grandpa.

There is no longer any pesky recent past to mull over and stew and discover regrets about. A blessing and a curse. 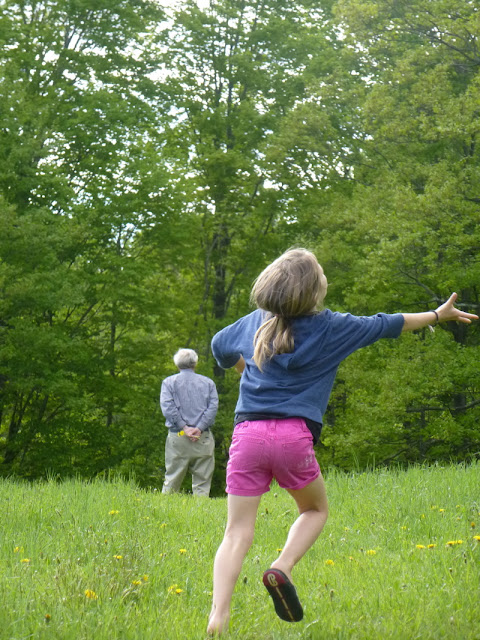 He is my walking Bhudda, gratitude- master of a dad. Stopping, always stopping, to remember what's gone right in his life, smelling the apple blossoms, accept the Dandelion bouquets, and comment on the pervasive green, the teeming perfection, that surrounds him.

Content to admire the miracle of trees that have been here, rooted deep, as long as he has-- standing straight and present, the model of persistence, in the woods, meadows, and hillsides he calls his own. 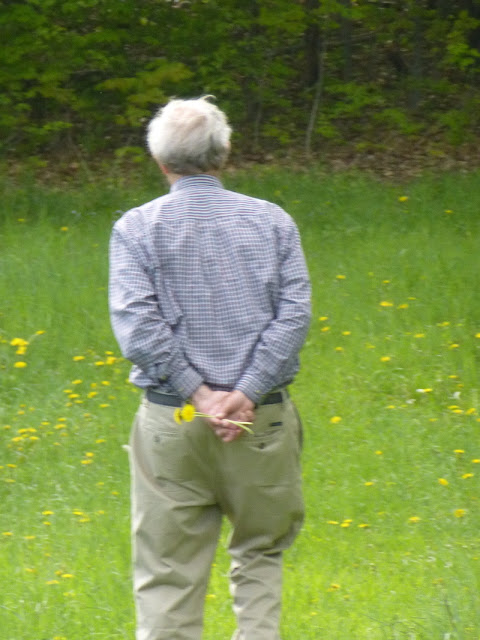