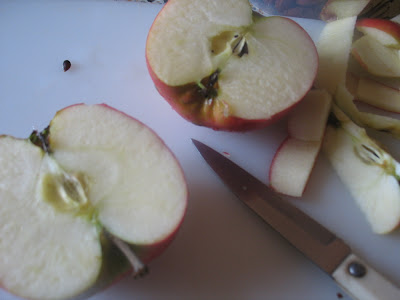 Certain parenting moves have become second nature to me. Things like bending down to do up shoes, or saying "keep your chin up" while I take on the perilous challenge of fastening a bike helmet, then kissing that beautiful, trusting upturned face, or squatting down and saying, "step in" while I hold a tiny pair of underwear in my hands.

I've tried to let Isla put on her own underwear but she often emerges from the task saying, "My undies aren't workin', which usually means she has put one of her legs through the waist band again, leaving a too tight leg band around her waist.

And anyways, I like doing it for her. It makes me feel maternal, reliable, giving. Especially when she grabs hold of my ears to keep her balance.

I repeat phrases, like, "don't forget to brush your teeth," or "drink your water," or "Actually, I don't think that's such a great idea," all day long.

But I also repeat actions. Actions like raking my fingers through my girls' tangled, wet hair, or tucking that stubborn strand behind an ear, and getting a spoon from the drawer, or pouring cereal into a bowl, or stirring cocoa powder into the mug of warm milk, or slicing and peeling apples.

The other day while I was slicing and peeling yet another apple and assembling the pieces, on a plate with cheese, for my "snacky" children, it occurred to me that I had been in that exact pose so many times before. It was deja vu without the spooky part, because I know where I've seen it before. I've lived it, again and again.

I have sliced and peeled so many apples for my kids, I don't think I'm even conscious of doing it anymore. And I definitely don't think I've ever stopped to notice just how perfect, beautiful even, an apple is. I am an apple peeling machine. I am a mother.

Could this go in the special- skills section of a resumĂ©?

What repetitive rhythms are on your resumĂ©?


Some more repetitive parenting topics are being discussed over here.

It is almost a dance, isn't it? There is such beauty in being a parent, even the tedious parts. I love the end of the movie Parenthood when Steve Martin is diapering his baby while chatting. It makes me tear up just thinking of it. Thank you for making me see beauty in the ordinary:)

You have made the boring and mundane turn into the true beauty of life. Thank you.

mooserbeans: It is a dance. I don't remember that scene in the movie, but I can remember often having "moments" at the changing table, when time froze, and I was looking down into my baby's face and she was looking up at me and everything feeling just as it should be. Can't really describe that one, but I don't want to forget it.

Bethany: You're very welcome. A rare moment of seeing my glass as half full. Today might find me cursing the repetitive nature of motherhood. We'll see.

You blog feels like a Carl Larsson painting. Intimate and beautiful... Repetitive, too, yes. I think it was Bill Cosby in his old comedy shtick that said parenting was "dain bramage." LOL. 'Tis.

It makes me understand how hard empty nest syndrome must be for parents whose kids are grown. It makes me understand pre-teens a lot more, too. They want NOTHING done for them anymore, but here we moms are, having perfected the apple-peeling rhythm, and what a shock that they are asking us to STOP.

Ahhh. Motherhood. Thank you for sharing yet again so wonderfully what it is like through your lens. :)

When you put it this way, I am one seriously TALENTED Mommy :D j/k
I too tend to feel like it is Groundhogs Day around here. My kids seem to always request the same meals and the same shows and are so set in their routines (which I have forced on them!) But it makes life manageable for us, while at times a bit tedious, but there is something to be said for a well oiled machine!!!

And the thing is that our repetive dances are being done all over the world, all the time. While Betsy is slicing apples in France, I am probably also slicing them in australia (or maybe not, depending on the time difference- but you know what i mean) I've often thought you could record a CD for those mornings when you just can't say all those things again- pop it in the player and sit back;
"Kids! Breakfast is on the table!"
"Did you check under your bed?"
"What do you want on your sandwich today"
"Whose library day is it?"

And those boring moments are the ones that stay with us, aren't they? It's funny when we become mums and do the same actions and say the same things we remember our mums doing for us.