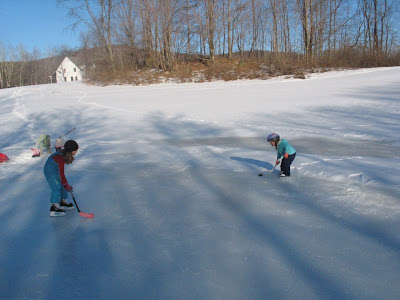 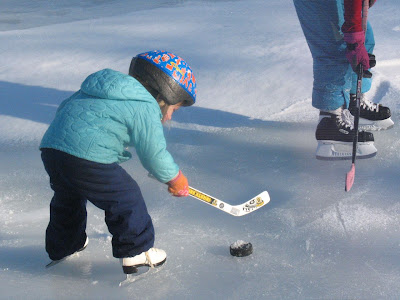 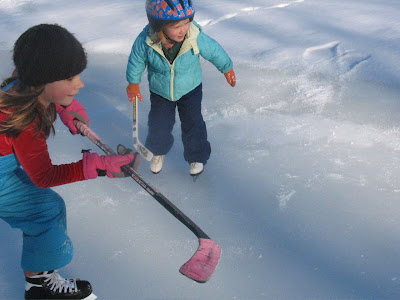 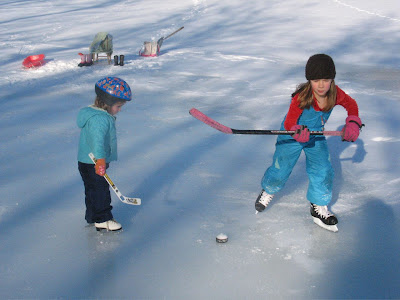 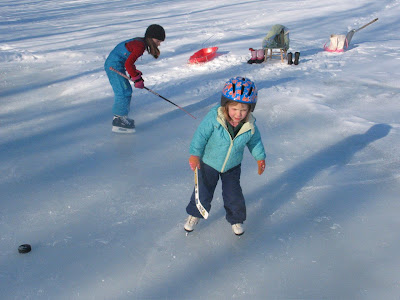 Despite the fact that I am still reeling, quite embarrassingly, from the news that Glen Hansard and Marketa Irglova of Once fame have broken off their reel- life romance, and we have just 9 days left to clear out of our house before the rental tenants move in, I am managing to occasionally give my children some semblance of a normal childhood.

For anyone who wasn't aware of my little problem, click here.

Winter has been good to us. And good things come from seemingly pesky meltdowns in the form of a makeshift ice rink in the middle of our meadow. It's the winter version of making hay while the sun shines. Anyone know what you might call that?

Make ice when the snow melts? Tie skates when the water freezes?
Whatever it is they're doing, they really, really enjoy it. And I enjoy watching. It makes me feel like a good mom.

Anyways, I sincerely hope that Glen and Marketa might manage to see their way through the dust storm of dried up passion and continue to make music together. Please.

More insight into my depraved mind here and here too.
Posted by Betsy at 6:50 PM 10 comments:

Email ThisBlogThis!Share to TwitterShare to FacebookShare to Pinterest
Labels: glen hansard and marketa irglova, hockey mom, Once the movie, parenting, the swell season

My dad and the fisherman's wife

You know that story of the Fisherman's Wife who, when given a little, kept wanting more and more until, eventually, she was left with nothing again?

I feel a bit like that wife right now. Well, indirectly.

About a week after blogging about the sad but true state of our personal finances, I was faced with my mom and dad in my living room. After having a casual cup of tea and making small talk, my mom said to my father, "Where's your check book, Doug?"

"Oh yea," my dad said. "We read your blog and want to give you some money."

"I don't need your money, Dad," I said, with as much conviction as a girl in debt can muster. "I'm a grown woman. We'll be alright."

But, as you might guess, he insisted. And I accepted a check from my dad.

The first thing we did was get our car shocks fixed and subsequently inspected. I am almost positive that it was that little detail, where I said our inspection was overdue and our shocks were shot, that was the clincher for him. It was the perfect bait for an overprotective, worrywart of a father who can't resist the paternal urge to take care of his daughters no matter their age or station in life.

While I never wrote the post with that sort of response in mind, (My dad doesn't normally read my blog. My mom said he happened to come in and read over her shoulder in this particular case.) I can't help but chuckle about it. That is when I'm not feeling stupid for not being in a more financially secure place in my life, at my age.

And, for some reason, it makes me think of the Fisherman's Wife and how, if I were her, I would be devising a way to get more, bigger, better things, out of my big fish of a dad, the King of the sea. But I am not the Fisherman's Wife. And I would do no such thing.

But I can't help wondering what sort of sob story would I have to tell to get him to make me a Queen and get me a palace with a fine coach drawn by six white horses? And, after that, to be in charge of the moon and sun?

This is what comes from reading too many childrens stories.
Posted by Betsy at 10:16 AM 5 comments:

Truth, consequences and traveling with pets 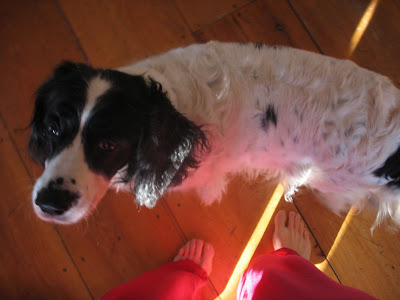 As it turns out, I may have been telling a few untruths in recent posts. No, I didn't pull a James Frey and fabricate the story about us moving to France-- we are going to France-- but I've gotten some of the details wrong.

Have I mentioned that my husband and I aren't the greatest communicators? I seem capable of maintaining conversation with the rest of the world, but not my husband.

As it turns out, it is not definite, in any shape or form, that we will be living in the main house while we renovate the "guest house." Ian suggested this to his sister, she never responded one way or another, then relayed the idea to me, without mentioning that his sister hadn't actually approved the idea.... yet.

I, of course, loved the idea since it meant we wouldn't have to seek out, and, most importantly, pay for, a rental home or apartment. I loved it and I ran with it. I pounced on it and turned it into our "truth", without first doing some fact checking.

While some may consider a furnished French flat superior to a cold, drafty, sagging farmhouse which may or may not have a kitchen sink (it does), I was kind of digging the romantic idea of roughing it, however crazy that idea was.

As it stands, this detail remains undetermined but I felt the need to confess my "free interpretation" of the truth.

Another reason I glommed onto this truth is with the vain hope that we can somehow bring our dog, Ruby, with us. I really want her to come (she's already been installed with her handy dandy computer chip) and I wonder how easy it will be to get an apartment that allows dogs.

Any of you Euro-savvy travelers know the answer to that one?
Posted by Betsy at 10:04 AM 10 comments: