not too cool for school after all 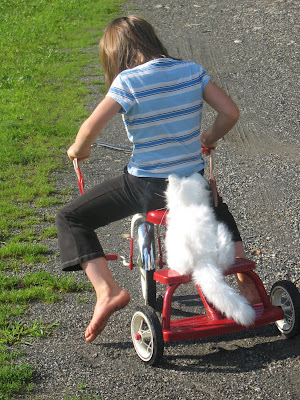 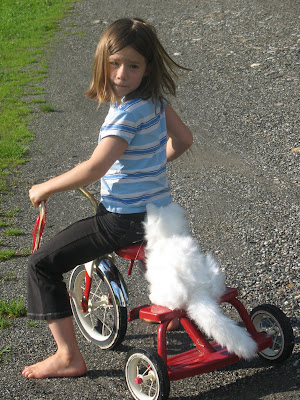 I just recently penned a blog post over at Momformation, lamenting the fact that summer was ending and , most importantly, school was beginning.

I left no doubt that I was a rebellious school hater as a child. Not averse to learning, mind you, learning is everything, learning is life, but averse, almost viscerally, to the institutional setting in which most of our formal learning takes place.
So why don't I homeschool?

Exhibit A:
"Mommy, is The Wizard of Oz old?" Esther asked me at lunch today.
"What do you mean, Essie?" I responded. "Are you asking if the movie is old, or if the Wizard character is old?"
"The movie," she said. "Well that depends on what you mean by old," I said. "There's five years old, and there's 100 years old. The Wizard of Oz is considered to be an old movie."

"Well is the guy who wrote the story still alive?" she said, growing impatient with me.

"No," I said. "As far as I know he is long since dead." I said, impatient myself, mostly because I had no idea if what I was saying was true. "At least I assume he is," I added.

"Well if he was still alive," she continued. "How old would he be."

At this point I became the irritable, twitchy person I often am in these types of exchanges.
"Esther, if I knew that, I would have to know exactly when he was born, but I don't so I can't answer your questions, can I?"

Esther’s questions once soothed and interested me and made me proud. They still do, to a point. But now, often, as her little brain develops exponentially rather then incrementally, I find myself under fire from a constant, rapid -fire, barrage of seemingly unanswerable questions. Questions that leave me saying, "I don't know," at least 20 times per day.

And I can't help feeling inadequate, even when some of them, like "what's the smallest lake in the world?" are so incredibly random they should just make me laugh and wonder.

On that note. Esther is, and I am, soooooooo ready for school.
Posted by Betsy at 10:13 AM 9 comments:

Email ThisBlogThis!Share to TwitterShare to FacebookShare to Pinterest
Labels: back to school, curious children, homeschooling

when you're mind's made up

We're not totally over it yet around here. As you can see, Glen Hansard still occupies our hearts and minds to an alarming degree. Isla will definitely be ready for the call when it comes. I remember everything about how it felt to successfully fasten a towel to my head, just like my older sister, and pretend I had long luxurious hair down to there, for the very first time. Can you? And this. This is a whole different kind of cool. Does she feel it, oblivious to the fact that her shades are upside down? Or do I just imagine I can see her feeling it?

More about life and longing here.
Posted by Betsy at 4:01 PM 14 comments: